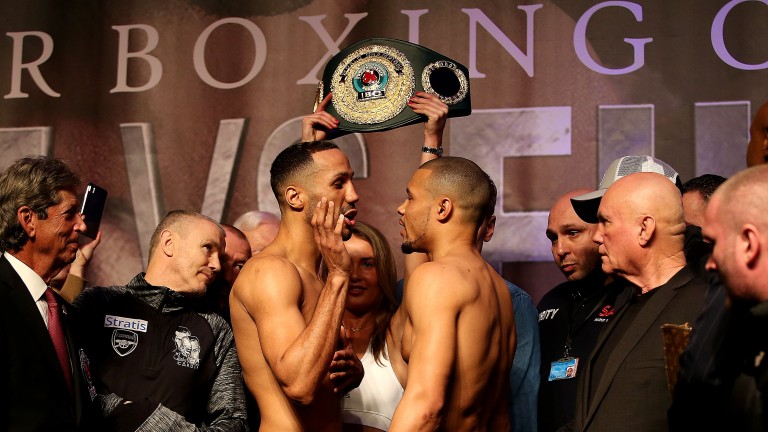 Chris Eubank jnr was schooled inside the ring then savagely beaten by the media following his defeat to George Groves last year, but he is a slight favourite to get his career back on track by beating James DeGale for the vacant IBO super-middleweight title at the O2 Arena in London.

Eubank got his tactics badly wrong against Groves and spent much of the fight swinging punches at fresh air as he chased his opponent around the ring. Groves was able to use his boxing smarts to pick him off and win on points despite dislocating his shoulder in the late rounds.

It was a massive wake-up call for Eubank, who seemed to have no back-up plan when it was obvious that his strategy was not working.

Eubank has spent the majority of his career with no main trainer, insisting that he can do it all himself with Ronnie Davies as an overseer and his father Chris Eubank snr hogging the limelight and preaching nonsense philosophy whenever a camera is pointed in his direction.

Changes were clearly required, so he enlisted the help of American boxing coach Nate Vasquez, who has been living in Eubank's house along with his main sparring partner, Denis Douglin, which is an interesting dynamic as the notoriously reclusive Eubank has spent his entire adult life living alone.

Vasquez has promised 'a new Chris Eubank' and it remains to be seen what affect his coaching will have come fight night - Junior has said he "might" listen to his advice in between rounds.

But Douglin has returned to Las Vegas, and he was not impressed with the sparring sessions.

"I expect DeGale to win", Douglin said this week in an unusual betrayal of sparring etiquette. "Chris fell for the simple traps I set him, and James is much better and slicker than I am. If I can trick him then DeGale will cause him big problems."

DeGale has also has a rough time, with bad injuries and underwhelming performances over the last two years leading many to conclude that he is finished at world level.

Despite winning Olympic gold in 2008 DeGale has never managed to fully earn the respect of boxing fans.

A wafer-thin majority-decision loss to Groves in 2011 forced him to fight on the road for much of his career, but he turned things around and won a world title by beating Andre Dirrell in America against all odds in 2015. He held the title until a shock defeat to the unheralded Caleb Truax two years ago, when he rushed back too quickly from shoulder surgery and looked a shadow of his former self.

An Achilles injury added to his problems, but the DeGale camp is a solid unit with head trainer Jim McDonnell there from the start of his career, and they insist their fighter is fully fit and ready to go.

Paulie Malignaggi has been brought in for the camp and seems very impressed with what he has seen, and if DeGale is fit it could turn into another bad night for Eubank.

Heavyweight Joe Joyce is making up for lost time after winning silver at the Rio Olympics in 2016, winning all of his first nine pro fights by knockout, and he is just 1-7 to make it ten in a row with a KO of former WBC champion Bermane Stiverne for the Commonwealth title.

Stiverne took was the first man to take Deontay Wilder the distance but he was blasted out in one round in the rematch and he weighed in at a career-high 273lbs on Friday - that's 34lbs heavier than he weighed in the first Wilder fight.

Stiverne seems like he is just out for the pay day, so expect Joyce to take him out early - odds of just 4-6 for Joyce to win in the first four rounds say it all.

Lee Selby hasn't been seen since losing his world featherweight title to Josh Warrington last May, but he should get back to winning ways against American Omar Douglas after stepping up to lightweight.

Selby isn't known as a big puncher and may want to get some rounds under his belt, while Douglas has not been stopped before so it makes sense that the Barry fighter is just 4-11 to win on the scorecards.

But Douglas has never fought outside of the US before, never been in a 12-round fight and never fought anyone of Selby's quality, so it's worth taking a chance at 4-1 that the Welshman stops him.