Jags can put Titans slump behind them 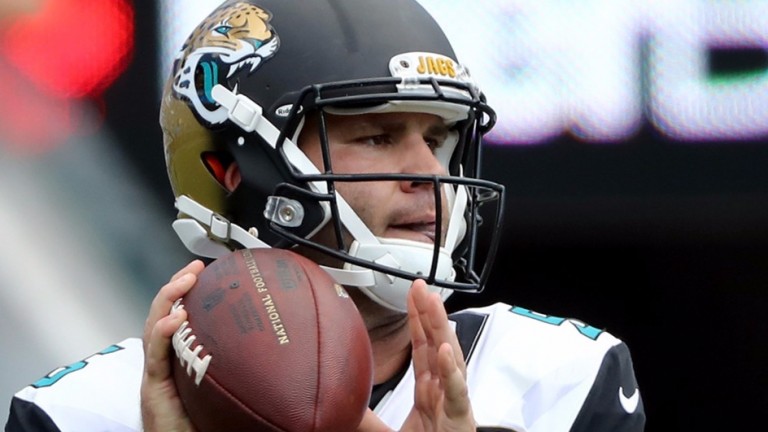 Jacksonville at Kansas City
The Jaguars have had ten days to dwell on their dismal performance against Tennessee last week, but it is too early to cast their season aside and they can react positively at Kansas City.

Jacksonville’s first-half performance against the Titans bordered on the pathetic as they conceded 27 unanswered points before the break.

The performance cost offensive coordinator Greg Olson his job and left many wondering just how long head coach Gus Bradley has left at the helm.

But it is only a month ago that the Jaguars beat Indianapolis at Wembley and while they have won just two of their seven matches, they were defeated by four points against Green Bay and two against Baltimore so they can mix it with decent teams.

Quarterback Blake Bortles threw three touchdown passes in the game against the Titans and although the game was already out of reach, perhaps that was an indication that they have already put it to the back of their minds.

Kansas City’s form contrasts starkly – they have won their last three matches – but there are a few injury concerns.

A combination of Alex Smith and Nick Foles shared quarterback duties in their 30-14 victory over Indianapolis and former Ram and Eagle Foles has been given the nod to start.
Running back Spencer Ware is out with concussion and that should have a detrimental effect on the rushing game where Jamaal Charles is already absent.

The Chiefs have failed to cover the handicap in their last five matches against teams with losing records and while they have the ability to come out on top, the Jaguars can show some mettle and stay within seven-and-a-half points of their hosts.

New York Jets at Miami
There will be plenty of talk about Dolphins running back Jay Ajayi before and during Miami’s AFC East divisional clash with the New York Jets today.

The London-born rusher can become the first player in the Super Bowl era to rush for more than 200 yards in three successive matches after explosive performances against Buffalo and Pittsburgh.

But that could all become a distraction in what promises to be a tight encounter. As usual, New England are disappearing into the distance in the division and both of these teams desperately need a victory to keep their slim playoff hopes alive.

For all Ajayi’s headline-grabbing performances, it has to be remembered that the Jets also go into the game having won thir last two matches.

A three-point victory over winless Cleveland may not be much to write home about, but the Jets had to recover from a 20-7 deficit and while there are concerns about the effectiveness of quarterback Ryan Fitzpatrick, it was not one of his worst performances of the season.

Ajayi’s performances have proved of great benefit to Dolphins QB Ryan Tannehill as it has taken the spotlight away from his shortcomings.

The Jets have conceded an average of 74 yards on the ground in their eight matches this season which is the best tally in the league so they are capable of keeping a close eye on Ajayi.

The Dolphins beat the Bills by three points and this could be equally close.