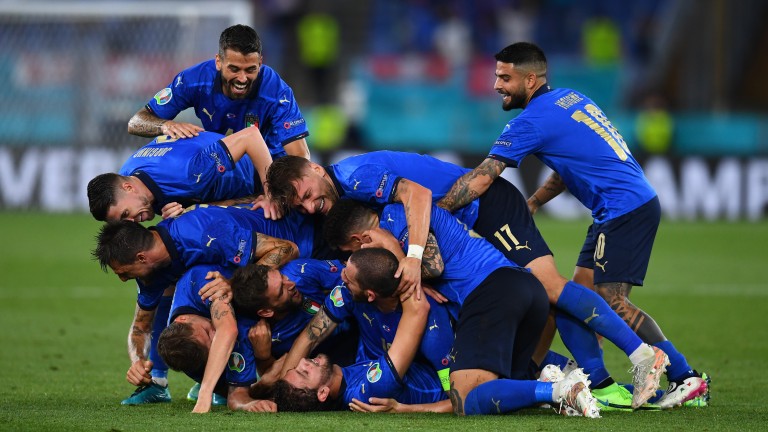 Free Euro 2020 football tips, best bets and analysis for Italy v Austria in the round of 16 on Saturday.

Italy to win and under 3.5 goals
2pts Evs BoyleSports

Austria have reached the knockout stages for the first time but are likely to come up short against a hugely impressive Italy side, who are unbeaten since September 2018.

Italy once had a reputation for starting tournaments slowly and finishing them in the winner's enclosure but they have been on the front foot from the start of Euro 2020 and can maintain their 100 per cent record by defeating Austria at Wembley.

Great Italian teams have been built on rock-solid defences and similar qualities are evident in Roberto Mancini's side, who have won their last 11 matches without conceding a goal.

However, Mancini was a top-class striker in his playing days and his Azzurri team showed a positive mentality by kicking off the tournament with superb 3-0 successes over Turkey and Switzerland .

Mancini made eight changes for the final group-stage match against Wales and there was a drop off in quality and intensity, but he was able to hand a first start of the Euros to key midfielder Marco Verratti, and his team were worthy 1-0 winners, stretching their unbeaten sequence to 30 matches.

Verratti could be one of the few players to keep his place as Mancini reverts to his strongest line-up at Wembley.

It is another game that Italy should win, although they will have a healthy respect for Austria who are through to the knockout stages for the first time in their history.

Austrian football has been on the up and Franco Foda's Euro 2020 squad features 21 players plying their trade in Germany's Bundesliga last season.

However, Foda's side were brushed aside 2-0 by the Netherlands in their toughest group fixture and will need to play a lot better to have any hope of reaching the quarter-finals.

Foda switched from a back three to a four for his team's final Group C fixture against Ukraine and was vindicated by an impressive 1-0 victory.

The new system seemed to suit his players much better with David Alaba far more influential after switching to to left-back from central defence and Marko Arnautovic impressing on his first start of the tournament.

With Arnautovic providing a focal point up front there was extra room for midfielder schemer Marcel Sabitzer, who looked a lot more comfortable than he did in the Netherlands defeat.

There have certainly been signs of progression since March when Austria lost 4-0 at home to Denmark in a World Cup qualifier, but whereas the Austrians are a work in progress, Italy look like a well-oiled machine capable of claiming their first European crown since 1968.

Italy have won their last 11 matches without conceding a goal.

Italy
Italy were as impressive as anyone in the group stage and should advance to the last eight without need of extra-time.

Under 1.5 Austria goals
Austria offered more of an attacking threat in the 1-0 success over Ukraine but they might struggle to open up the Italians, who are searching for a 12th successive clean sheet.

Xaver Schlager to be booked
The Wolfsburg player has greatly impressed in the holding-midfield role but he could be forced into mistakes by a top-class Italy midfield featuring Jorginho and Marco Verratti.