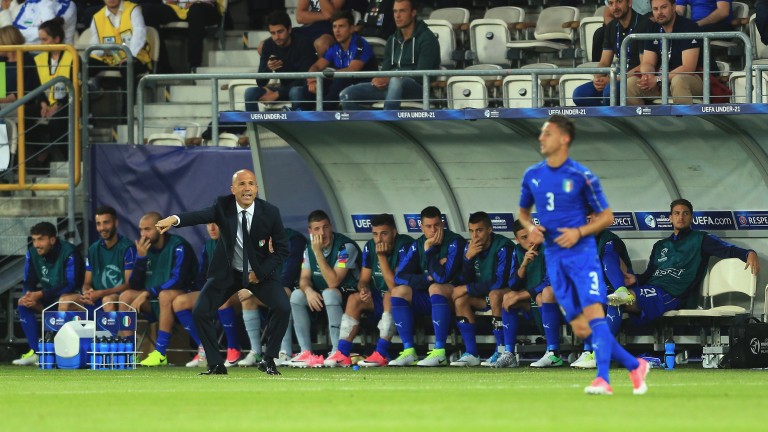 Italy's hopes of reaching the European Under-21 Championship semi-finals are hanging by a thread after their surprise 3-1 loss to the Czech Republic on Wednesday but they can give themselves a chance of progressing by beating Group C leaders Germany in Krakow.

A triumph for the Azzurrini could still leave them in third place if their winning margin is not better than the Czechs' result against basement boys Denmark in Tychy - the matches are taking place at the same time.

The Italians may have to react to news of events in the other game but at the outset their substantial challenge is to try to defeat a Germany side who have impressed in successes over Czech Republic (2-0) and Denmark (3-0).

Germany are not 100 per cent assured of a semi-final place and head coach Stefan Kuntz may feel he has to select a full-strength side.

Kuntz's charges have barely been tested so far but that is likely to change against a potentially strong Italy side who are about to enter the last-chance saloon.

Italy were unbeaten in ten qualification matches and started the competition impressively by winning 2-0 against Denmark.

Everything seemed to go wrong for them against the Czechs but they could count themselves a little unlucky after edging the shot count 14 to 13.

Italy can play a lot better than they showed on Wednesday and head coach Luigi Di Biagio is likely to bring back four players – Antonio Barreca, Mattia Caldara, Roberto Gagliardini and Marco Benassi – who were controversially rested against the Czechs.

Maybe Di Biagio took the Czech challenge too lightly. However, he will pick his strongest side to face the Germans in an effort to rescue the situation.

Italy are likely to cause the German defence more problems than the Czechs and the Danes did and if they play with greater focus they can keep things tight at the back.

Germany have showed that they remain strong despite the omissions of talented Leroy Sane, Joshua Kimmich, Timo Werner, Julian Brandt, Leon Goretzka and Niklas Sule, who were called into the Confederations Cup squad.

However, there is not a huge gap in class between the teams and there is a strong value case for siding with Italy.

The Czechs will give themselves the best possible chance of qualifying if they justify favouritism against Denmark.

Their performance against a disjointed Italy was much better than the poor display they turned in against Germany.

However, they were unfancied at the start of the tournament and look short priced odds-on shots to defeat a Danish team who will be playing for pride.

Denmark will not want to exit the competition with a whimper and look overpriced to sign off with a win.

Germany
Stefan Kuntz named an unchanged side for the 3-0 victory against Denmark and may keep things simple again as they seek to advance to the last four.

Czech Republic
No injuries have been reported since the 3-1 win over Italy and changes are likely to be kept to a minimum.

Denmark
Head coach Niels Frederiksen made just three changes between the defeats to Italy (0-2) and Germany (0-3) but wholesale changes look likely for the final match with Denmark out of qualification contention.

Key stats
Italy have lost only one of their last 14 competitive matches.