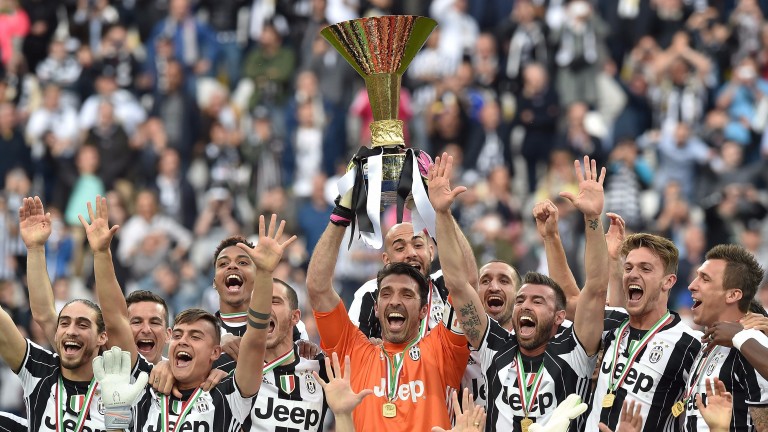 Twenty years have passed since Juventus were crowned kings of Europe and now’s the time for Italy’s one and only superpower to storm their way to Champions League glory.

Four times since that triumph in 1996 Juve have finished runners-up, the most recent in 2015 when they were a definite second best to Barcelona.

That 3-1 defeat in Berlin came at the end of Massimiliano Allegri’s first season in charge and he vowed then that Juve would be back.

His second tilt at the trophy ended in the last 16 against Bayern Munich but now it promises to be third-time lucky for a side who can focus all their fire on Europe this season.

Last season Juve, having sold key players Andrea Pirlo, Artur Vidal and Carlos Tevez, took a while to rebuild and they were involved in a scrap for Serie A glory for most of the season. It may have taken its toll in terms of European ambition.

This season, stronger again despite the sale of Paul Pogba, the Scudetto should be a stroll which means Allegri can concentrate on conquering the continent.

They’re a 12-1 chance and that looks a big price given the way this squad has evolved under their excellent head coach.

He’s basically got Italy’s defence to call upon and a midfield which has a different look to it minus Pogba though Sami Khedira is class and Miralem Pjanic a star signing.

And up front there are goals in Gonzalo Higuain and Paulo Dybala, and if either of those two starts firing blanks Mario Mandzukic is a superb player to have as back-up.

Just as Juve are my alternative to Barcelona, Real Madrid and Bayern Munich in the outright betting, Higuain and Dybala are big-priced top scorer shouts to eclipse the likes of Luis Suarez, Cristiano Ronaldo and Robert Lewandowski.

Last year, Juve paid the price for not winning their group and were immediately bundled out by Bayern. Manchester City, who did pip them to top spot in Group D, went on to make the semis.

Winning your section is crucial and Juve’s is much easier this season with Seville having lost key players – and their manager – after winning the Europa League. I don’t expect Allegri to make the same mistake again.

Inevitably the big three make the market but I’ve got squiggles by all three.

Against Real Madrid it’s the obvious one – the fact that sides simply do not retain the Champions League.

Barcelona continue to be too reliant on their stellar front three and, as we saw against Atletico last year, when that trio don’t fire the machine can stall. Andres Iniesta, incidentally, is 32 which begs the question; can they continue to rely on the veteran playmaker?

Age is creeping up on lots of Bayern players as well and I still wonder if Carlo Ancelotti is the right fit to take Bayern further.

More to come from Portugal

An unforgettable summer for Portugal in the Euros can usher in a memorable season for their club sides as well with all three of their teams making it into the knockout phase.

Benfica are obviously second best behind Napoli in Group B but much better than Dynamo Kiev and Besiktas. It’s an obvious forecast.

Porto also look overpriced to win Group G, which has to be the weakest of the eight groups.

Porto’s home record in the Champions League is impressive – both Chelsea and Bayern have lost there in the last couple of campaigns – and Leicester, Club Brugge and Copenhagen are going to find it tough getting anything off them.

I can also see Sporting pipping Dortmund for second spot in Group F.

The matches between the two sides are going to be winner-takes-all affairs with Real Madrid nailed on for top spot. And I’m not convinced about Dortmund.

Potentially, they could be great. They’ve invested a lot in young talent and in a couple of years’ time they could be something special.

But losing players of the calibre – and with the experience – of Henrik Mkhitaryan, Mats Hummels and Ilkay Gundogan in the same window could prove disruptive.

You look at the Premier League right now and Manchester City are flying while Arsenal are struggling – but I can see those roles being reversed in Europe.

It’s a really intriguing quartet of English teams in the competition but of the four, only see Arsenal look like guaranteed qualifiers.

Not only that, I also think they’ll pip Paris Saint-Germain for top spot in Group A and they know better than most the value of winning the section, whatever Arsene Wenger tends to say when they haven’t.

Five seasons have passed since Arsenal last won their group. In the subsequent four campaigns they’ve qualified as runners-up and been bundled out immediately in the last 16.

Six of the eight group winners last season made it into the quarter-finals. The four semi-finalists had all won their group. You can’t overstate the importance of topping the qualifying section and Wenger’s Arsenal have got a great chance of doing just that, with PSG in transition.

So the 10-3 that they are the furthest progressing English team looks a fantastic bet.

City are going to struggle to finish ahead of Barcelona or, indeed, Monchengladbach who are little more than kingmakers in Group C.

The same is true of Leverkusen who I’m surprised to see are second in Group E betting behind Tottenham.