It will take something special to stop Les Bleus

Cavani absence was a massive blow to Uruguay 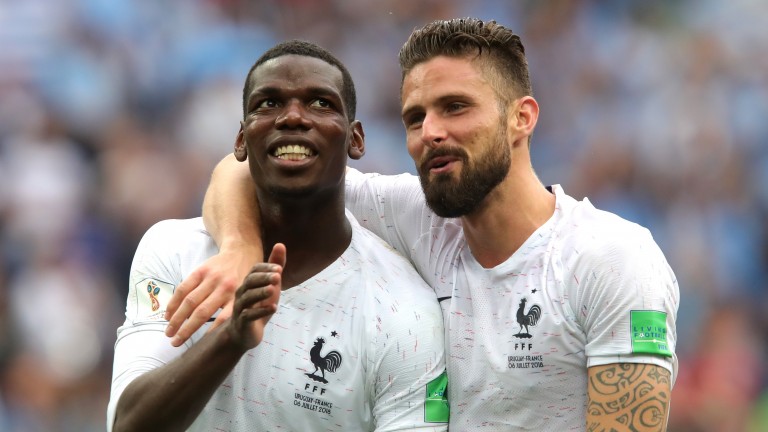 Paul Pogba and Olivier Giroud were all smiles at full-time
Alexander Hassenstein
1 of 1
By Dan Childs 6:06PM, JUL 6 2018

1 It will take a big performance to knock out France
France won the game without playing fantastic football but they are gaining in confidence and have their eyes fixed on going one better than at Euro 2016.

For 40 minutes it was a hard watch with France struggling to adapt to the approach of their well-organised and fiercely competitive opponents.

But Raphael Varane's header got them in front at half-time and they never looked back in the second half.

Paul Pogba and Antoine Griezmann grew into the game and N'Golo Kante quietly went about his work of mopping up any dangerous Uruguay attacks.

The French were tested mentally and physically by Uruguay, who became more and more frustrated and crossed the line with some of their tackling.

A tougher test awaits in the semi-final but France look strong in all departments and will be tough to overcome.

2 A good keeper makes a huge difference
Over the course of the game France were much the better side but one of the key differences between the teams was the men between the posts.

Hugo Lloris came up with a superb save on the stroke of half-time to keep out a Martin Caceres header, ensuring Uruguay would have to play in a different manner after the break.

And any remaining Uruguayan hope was extinguished when goalkeeper Fernando Muslera dropped a clanger by allowing Griezmann's long-range shot to slip through his fingers.

Muslera had almost cost his team earlier in the game by trying to dribble past Griezmann and his poor performance turned a tough task into an almost impossible assignment.

3 Uruguay lacked the depth to go further
With everyone fit Uruguay were capable of causing problems for almost any team in the tournament but there was always a lack of depth to the squad.

Edinson Cavani was arguably their best player in the tournament and his absence was a massive blow because it also negated the strengths of Luis Suarez.

So much of Uruguay's play is focused around their front two and Suarez soon become frustrated with the lack of quality shown by  Cavani's replacement Cristhian Stuani.

There was no lack of desire in the Uruguayan performance but they lacked the quality required to take another step forward.