Goffin value to shine in bottom half of the draw 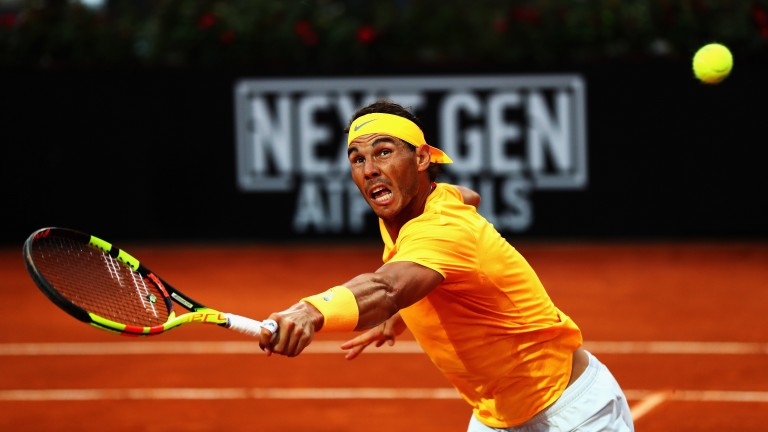 Rafael Nadal on his way to victory over Alexander Zverev in the Rome Masters final
Dean Mouhtaropoulos
1 of 1
By Joe Champion 8:00PM, MAY 26 2018

Can anyone stop Rafael Nadal? The clay legend is a red-hot favourite to win an 11th French Open and on the evidence of a near-perfect season on the European clay, he is hard to oppose for the Roland Garros showpiece.

The Majorcan bulldozed his way to victories in Monte Carlo and Barcelona, breaking John McEnroe's record for most consecutive sets won on a single surface and looking as invincible as he did in 2017.

Like last year, Nadal enters the French Open having lost just once in four tournaments on his beloved clay. Once again it was Dominic Thiem who inflicted the sole defeat on the Spaniard, this time in Madrid. Alexander Zverev, as was the case in Rome last year, was the beneficiary as the German won a third Masters 1,000 title in the Spanish capital.

In the absence of Roger Federer and Andy Murray, Nadal is the clear favourite with Thiem, Zverev and a rejuvenated Novak Djokovic jostling for position behind the 31-year-old in the betting.

Joe Champion's top tip
R Nadal to win & lose fewer than 70 games Evs
Realistically, while anyone can produce an exceptional one-off performance and Nadal is not immune to a poor display, it seems highly likely that the ten-time Roland Garros champion will at least go close to retaining his crown after his main rivals were all drawn in the opposite half.

The woefully out-of-form Jack Sock is the highest-ranked seed in Nadal's half of the first quarter and Kevin Anderson, swatted aside by the Majorcan in last year's US Open final, is at the bottom of the section.

Juan Martin del Potro, seeded in the second quarter, is struggling with a groin injury, while Kyle Edmund, Marin Cilic and Diego Schwartzman are other big names in the top half who the king of clay should be able to deal with.

If he is fully fit, and there's nothing that suggests that isn't the case, a final spot surely beckons for Nadal and there's a decent chance he will win the title while conceding fewer than 70 games, available with Betfair and Paddy Power.

Other selection
David Goffin 50-1
Who Nadal will meet should he make the final is up for greater debate. Zverev will surely break through at Grand Slam level soon but he has yet to reach the second week in best-of-five-sets competition and has stamina to prove after a demanding recent schedule.

Thiem has reached back-to-back semi-finals in Paris but made the perplexing decision to play in Lyon last week. The pair could well face each other in the quarter-finals.

Plenty of punters will be willing to take a chance on Djokovic returning to his best after the 2016 French Open champion put in some encouraging displays in recent weeks culminating in a creditable semi-final loss against Nadal in Rome.

The brilliant Serb looks to have benefited from linking up again with long-time coach Marian Vajda but he may still be a few matches short of contending at the very top.

Instead the each-way value in the bottom half could lie with David Goffin. The Belgian suffered a freak injury when he tripped on a sheet of tarpaulin at Roland Garros last season which ruled him out of the grass season.

But he was in fine form in the late 2017, upsetting Roger Federer to reach the climax of the ATP World Tour Finals, before another freak occurrence – an eye injury sustained in Rotterdam in February – halted his 2018 campaign.

Goffin made an unconvincing return in Miami but is peaking again on clay, reaching the quarters in Monte Carlo, the semis in Barcelona and the last eight in Rome, where he took Zverev to three sets.

While others may have better claims in the bottom half, Goffin moves well on the surface and his body is likely to withstand the demands on best-of-five tennis. No player will enjoy facing him and he looks a big each-way price.

Others to note
Marin Cilic The Rome semi-finalist is an inconsistent clay performer who makes little appeal in Nadal's side of the draw.
Kei Nishikori The Japanese ace is back in business and had chances to beat Djokovic in Italian Open. Has a tough draw.
Denis Shapovalov The exciting young Canadian is still learning on clay, though he could trouble Nadal if they meet in round three.
Kyle Edmund The Briton continues to improve rapidly but lack of consistency may cost him at the top level.
Stan Wawrinka Last season's finalist is a danger to all when fit but has struggled on the path back from a serious knee problem.
Grigor Dimitrov The world number five's confidence has dropped rapidly and his serve is vulnerable.