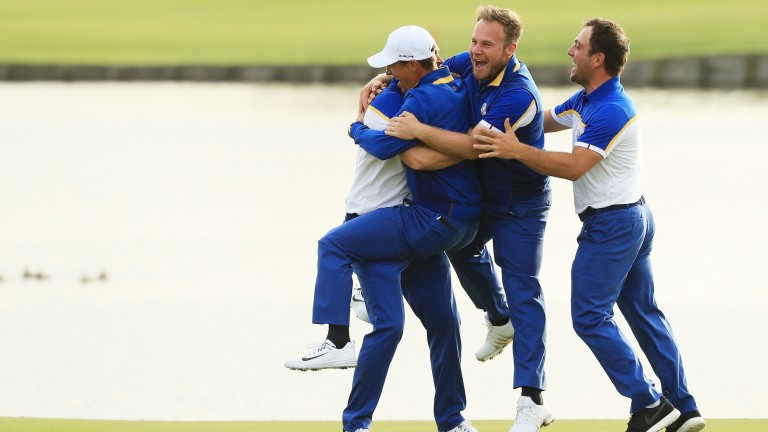 Links season starts this week and golfing connoisseurs are salivating at the prospect of the Irish Open, followed by the Scottish Open, then the big one – the Open Championship.

The Renaissance Club and Royal Portrush are coming soon, but first the European Tour moves to a gem on the west coast of Ireland, the Old Course at Lahinch GC. Phil Mickelson is a member and worships this terrain, and the ancient layout is revered the world over.

Jon Rahm, Irish Open champion at Portstewart in 2017, headlines the field after sharing second place in the Andalucia Masters on Sunday. The Spaniard must be respected but is no bargain at the price and value appears in short supply at the upper end of the market.

Lahinch has long been described as the 'St Andrews of Ireland' and the man who has dominated the Dunhill Links Championship at St Andrews over the last three years may take a shine to this new European Tour venue this week.

Tyrrell Hatton has been awesome at the Home of Golf in the Dunhill, winning by four shots in 2016, then again by three shots the following year, before almost completing a sensational hat-trick, finishing a shot behind a triumphant Lucas Bjerregaard in October.

Hatton's links credentials are further enhanced by strong performances in the Scottish Open – fourth at Royal Aberdeen in 2014 and second, beaten by just a shot, at Castle Stuart in 2016. He was fourth in the 2015 Irish Open at Royal County Down and fifth in the 2016 Open at Troon.

Few players are more adept at firing super-low scores on a straightforward links and Hatton is comfortable on such terrain, typically carrying a hot putter. This season he has not holed his usual share but the traditional dancefloor demon will almost certainly resume normal service soon.

With relatively benign weather expected for the vast majority of this tournament, Lahinch looks vulnerable, and Hatton can make merry in calm conditions.

Some injury niggles meant Hatton made an inconsistent start to this year, but there were signs of life in the WGC-Match Play, where he was unbeaten in his group before losing to eventual finalist Matt Kuchar, and he been solid since.

Eighth place at Colonial at the end of May was followed by four rounds of par or better in the Memorial, then a pair of closing 69s for 21st spot in the US Open last time out. Brooks Koepka was the only player who outscored Hatton over the weekend at the Pebble Beach Links.

The Buckinghamshire boy has been swinging well, suffering frustration on the greens, and he should contend if the flat stick behaves better over the next four days. The 27-year-old has just signed for the burgeoning 'Modest! Golf' management company, but could have plenty to boast about on Sunday night.

Bjerregaard is tempting after his Dunhill exploits, but his fellow Dane Thorbjorn Olesen looks a better investment. Olesen signalled he may have rediscovered his A-game with a final-round 65 for tenth place in the BMW International Open last time out. Nobody bettered that Sunday score in Germany and further progress can be expected in Ireland.

London-based Olesen was Dunhill Links runner-up in 2012 before winning the event three years later. His maiden European Tour title came on a links-style course in the 2012 Sicilian Open. Last year, the five-time Tour champ finished sixth in the Irish Open, then 12th in the Open, and he could be set for another jolly July.

Hardly anybody in this field has course form to draw upon, but Paul Waring has hugely positive memories of Lahinch GC, having captained Great Britain & Ireland to victory there in the 2003 Jacques Leglise Trophy, a prestigious amateur boys' team event. Waring inspired a 16.5-7.5 crushing of Continental Europe and he is playing well enough almost 16 years later to have high hopes of more Lahinch glory.

Birkenhead-born Waring grew up taming links tracks and finished 19th at Birkdale in his first Open as a professional. He won his maiden European Tour title in the Nordea Masters last year and is hoping to play his first Open as a Tour champ the week after next. A big performance at Lahinch could book a ticket to Portrush, where he finished tenth in the 2012 Irish Open. Sixth spot at Hillside in the British Masters in May was extremely encouraging links form.

Marcus Kinhult won that British Masters, further underlining his comfort on this type of turf, and the 22-year-old Swede looks another lively Irish Open outsider. He won the Lytham Trophy by eight shots in 2015 and his love of a links was showcased again by a final-round 66 for 32nd place on an excellent US Open debut at Pebble Beach last month.

A spot in the marquee threeball featuring local hero Sergio Garcia was not ideal for Kinhult last week at Valderrama, where he missed the cut, but the starlet could easily bounce back in Ireland, while the equally promising Grant Forrest is also worthy of support at juicy prices.

Forrest, who has just turned 26, was runner-up in the 2015 Amateur Championship at Carnoustie and the Scot has always been comfortable in links combat. He won the Scottish Amateur at Royal Dornoch in 2012, then the St Andrews Links Trophy in 2014.

Three runner-up efforts on the Challenge Tour last season saw Forrest graduate to the main circuit and he has not looked out of place. Seventh spot in Mauritius has been followed by 22nd in the Vic Open, sixth in the Hassan Trophy and 25th in Denmark. He deserves great credit for a share of 37th on his Valderrama debut last week and can flourish on a much more suitable course this week.

Others to note
Danny Willett
The 2016 Masters champion has been impressing on the US Tour in recent weeks and should make an impact. He was runner-up in the 2010 Dunhill and led the 2015 Open at St Andrews for a long way. His Irish Open record is strong and jet-lag carried from his Florida base is the only negative.

Joost Luiten
The solid Dutchman closed with 17 pars and a birdie at Valderrama on Sunday, finishing 20th having carded a gutbusting triple-bogey at the 17th in round two, where he complained of an unraked section of the greenside bunker causing his calamity. Another top-20 can be expected in Ireland.

Joakim Lagergren
The Swede, a Challenge Tour champion in Northern Ireland and a European Tour winner by the sea last year, has twice finished fourth in the Dunhill Links and could go well at a fancy price.

Robert MacIntyre
The Scottish rookie has finished second twice in the last two months, including at the British Masters at Hillside, and could threaten again in Ireland.

Tom Lewis
The Englishman impressed on links terrain as an amateur, winning the 2011 St Andrews Links Trophy, and was third in the 2013 Dunhill.

Paul Dunne
The Irishman knows Lahinch better than most and could be a factor on the form he showed when fourth in the Made In Denmark at the end of May.

When to watch Live on Sky Sports from 10.30am on Thursday

Course overview Paul McGinley is acting as tournament host this year and Lahinch on the west coast of Ireland is the new venue. McGinley has said he is looking to set the course up to provide perfect preparation for the Open Championship at Portrush in the middle of this month. Lahinch was founded in 1892 and became known as the 'St Andrews of Ireland'. The Old Course was designed by Old Tom Morris, renovated by Alister MacKenzie in 1927, then more heavily revised by Martin Hawtree between 1999 and 2003 to toughen it up for championship golf. Goats roam freely around the layout and feature on the club logo. The most prestigious event to be staged previously at Lahinch is the South of Ireland Championship, an amateur tournament which started in 1895. McGinley, Darren Clarke and Graeme McDowell are all former champions. The 2003 Jacques Leglise Trophy is another amateur event hosted by Lahinch. This is a rugged, varied, open, links layout, with a few blind tee-shots, some large dunes, and undulating greens, situated next to Liscannor Bay and exposed to the elements. There are only two par-fives, which are both on the back-nine (12th and 18th)

Type of player suited to the challenge This short, open layout looks vulnerable given the lack of serious wind in the forecast, so attacking links-lovers should make merry, even though McGinley has promised a decent test