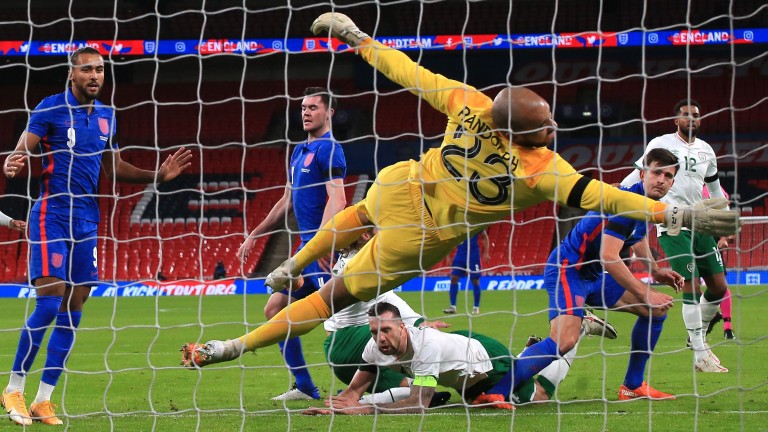 Ireland keeper Darren Randolph is beaten by a Harry Maguire header at Wembley
Pool
1 of 1
By Steve Davies 5:45PM, NOV 17 2020

Ireland
Matt Doherty and James McClean have gone into quarantine while Jeff Hendrick and Jayson Molumby are suspended. Adam Idah has joined a growing injury list.

Bulgaria
Left-back Dimitar Velkovski and captain Vasil Bozhikov have tested positive for Covid-19. Vice-captain Georgi Kostadinov is one of a number of injury absentees.

The end of the Nations League can't come quickly enough for Ireland and Bulgaria who meet in what promises to be a horror show in Dublin.

There is something riding on it – one of them will be relegated from Group B4 at the final whistle – but neither side makes much appeal given the form they are in.

The team who appeal least, however, must be uneasy 4-6 favourites Ireland.

For Ireland to land those odds they have got to find the net and that's something they haven't done in any of their last six internationals. Too often they don't even look like scoring.

They have scored just twice in their last nine competitive internationals, boast little obvious firepower, and only two members of the squad available to Stephen Kenny have managed more than a couple of international goals.

Bulgaria aren't in much better form but they could at least frustrate their hosts. They secured their only point in the reverse fixture in Sofia, a 1-1 draw which saw Bozhidar Kraev's opener cancelled out in stoppage time by Shane Duffy.

Since then Bulgaria have lost four out of four although they were unlucky to go down 2-1 at home to Finland on Sunday when CSKA Sofia's Galin Ivanov missed a penalty. They were the better team throughout but blew it.

More failed Covid-19 tests mean both camps have been weakened again and this promises to be an underwhelming affair given that Bulgaria's five matches in the group have featured nine goals and Ireland's five games have produced just five.

Nine of the ten matches played in Group B4 have produced under 2.5 goals.