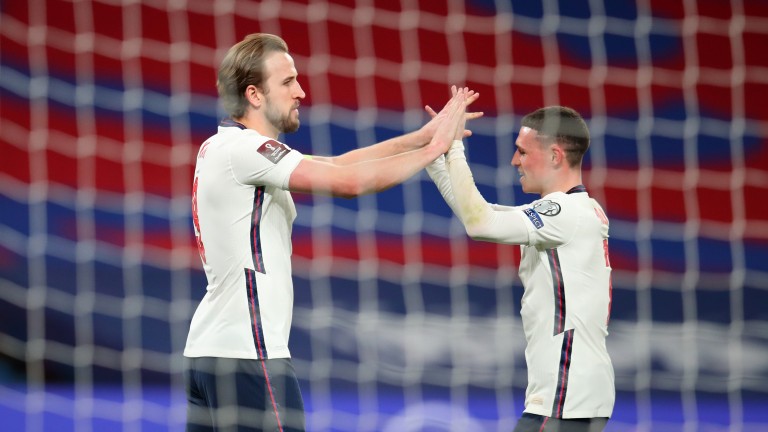 Sky's Super 6 competition is back for Euro 2020, where there will be a £100,000 prize up for grabs in the free-to-play game. Entrants must predict six correct scorelines to walk away with the jackpot.

England's Group D opener with Croatia at Wembley gets matters underway, before the first round of the competition concludes with Spain's showdown with Sweden in Seville.

Below Racing Post expert Aaron Ashley assesses the action with predictions on all six of the matches.

Click here to back all our match predictions with Sky Bet, the six-fold pays over 70-1

England were dumped out in the semi-finals of the 2018 World Cup in Russia by Croatia, but the Three Lions are fancied to exact their revenge in their Group D opener.

Gareth Southgate has fresh attacking talent at his disposal while the Croats are ageing and still reliant on the services of 35-year-old midfield maestro Luka Modric. Goals may be scarce in the pair's tournament opener and England, who have won their last six games and conceded just once, can grind out a narrow victory.

Austria twice got the better of North Macedonia in qualifying for Euro 2020 - winning 2-1 and 4-1 - and although the Red Lynxes are improving, it may be a similar scenario in their Group C curtain-raiser.

North Macedonia have failed to score in only two of their last 27 internationals, so they can grab a consolation goal against an Austria side who have a habit of underperforming in major competitions.

Netherlands are strong favourites to top Group C but they should expect a stiff test from Ukraine, who are well-organised under Andriy Shevchenko and have their own sprinkling of star quality.

The Dutch depend greatly on Memphis Depay and Georginio Wijnaldum for their goals and they won't find it easy breaking down a compact Ukraine outfit that have drawn their last three competitive matches 1-1, which includes against tournament favourite France in a World Cup qualifier in Paris.

A well-drilled Scotland completed a Nations League double over the Czech Republic at the back end of 2020, culminating with October's hard-fought 1-0 win at Hampden Park.

The Tartan Army will again be present for the Group D encounter in Glasgow and that may make all the difference against the Czechs, who also limped to a narrow 1-0 loss at Wales in March's World Cup qualifying campaign.

Slovakia appear the weak link in Group E and there is a distinct lack of firepower in their ranks, which may leave them vulnerable against a Poland side spearheaded by Robert Lewandowski.

The Slovaks have strong defensive foundations but they have failed to score in three of their last six matches and have won only two of their last 11 competitive fixtures in normal time. One goal may be enough to pinch it for the Poles.

Spain have the advantage of playing this fixture in front of home support in Seville, which should enhance their winning prospects.

La Roja were 3-0 winners when hosting Sweden in qualifying for this summer's showpiece, but they have conceded in six of their last eight games and the Swedes, despite missing injured talisman Zlatan Ibrahimovic, are improving. This may be tighter than some expect.