Bookmakers divided over Jack Grealish's chances of starting against Croatia 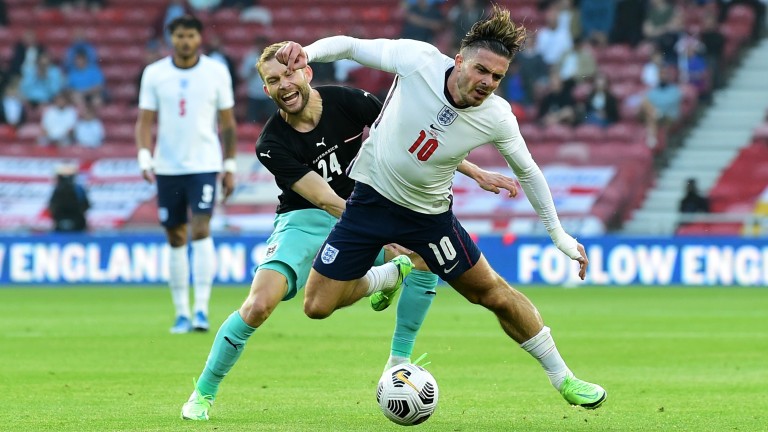 Ben White has been confirmed as the replacement for the injured Trent Alexander-Arnold in England's 26-man squad for Euro 2020 and the Brighton defender is 7-4 to start against Croatia on Sunday.

White impressed manager Gareth Southgate as England beat Romania 1-0 in their final warm-up game on Sunday but bookmakers believe he is still behind John Stones and Tyrone Mings in the centre-back pecking order for the opening Group D game.

Manchester United's Harry Maguire is 21-10 to make the starting line-up as he recovers from an ankle injury that kept him out of the Europa League final and England's friendlies against Austria and Romania.

Coral and Ladbrokes make Jack Grealish 4-7 to be in Sunday's starting line-up but he is a 5-4 shot with Betfair and Paddy Power.

The Aston Villa star won the penalty that was converted by Marcus Rashford against Romania and Grealish, Rashford and Raheem Sterling may be scrapping for one place if Southgate sticks with a 4-3-3 formation.

Jordan Henderson, who missed a spot-kick on his return to England action at the weekend, is 7-5 to start the opening game although his place in midfield is under threat from impressive Leeds man Kalvin Phillips, a 6-4 shot.

Villa's Mings is 11-10 to be one of Southgate's starting centre-backs while 7-4 chance White, who made his international debut as a substitute in last week's friendly win over Austria, is the same price as the more experienced Conor Coady.

Southgate's decision to replace right-back Alexander-Arnold with another centre-back could hint at a switch to a 3-5-2 formation with Walker playing as one of the three at the back.

That would free up a wing-back slot for Chelsea's Reece James (7-5 to start against Croatia) or 6-4 chance Kieran Trippier of Spanish champions Atletico Madrid.

Spain, who are 8-1 for the trophy, have had their build-up disrupted by a positive Covid-19 test for captain Sergio Busquets, who is likely to miss the first two group matches.

Spain's senior players are now self-isolating and unable to train so their Under-21s will take on Lithuania in Tuesday's friendly.

Luis Enrique named a squad of only 24 men for the finals and La Roja start their campaign against Sweden next Monday. The Swedes have been trimmed from 9-1 to 13-2 for victory in Sevilla.

Based on best odds from Betfair, Coral, Ladbrokes & Paddy Power