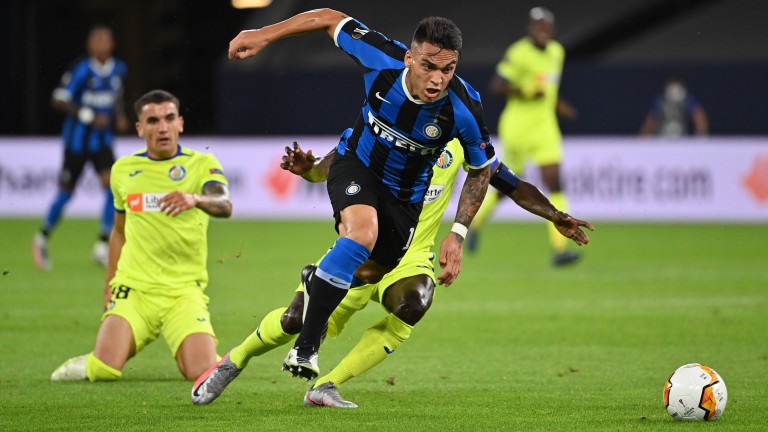 Antonio Conte can remain on track to end his European hoodoo by guiding Inter to a Europa League semi-final victory over Shakhtar Donetsk in Dusseldorf.

As a player Conte tasted success in the Uefa Cup and Champions League with Juve, but since becoming a manager it has been tough going for him as a boss and reaching the quarter-finals has been his best effort in Europe's premier club competition.

There was Europa League heartache too as Juventus lost a semi-final to Benfica in 2014 to miss out on a home final in Turin so Conte has questions to answer at this level.

Some of those can be answered here and Inter are fancied to beat silky Shakhtar in a high-scoring shootout in a showdown between two Champions League drop-outs.

Inter finished only one point behind champions Juventus in Serie A this season thanks to a strong finish in which they beat Genoa, Napoli and Atalanta before arriving in Germany to see off Getafe and Bayer Leverkusen.

Conte's team took a big step forward to beat Leverkusen although the 2-1 score flattered Bayer, who had been pushed hard by Getafe in the last 16.

Romelu Lukaku played well and scored in both knockout matches and his partnership with Lautaro Martinez gives Inter the edge. Martinez is on a dry spell of only two goals in his last 14 appearances, yet he remains a livewire and Lukaku's performance against Leverkusen was outstanding.

Inter have forced 25 shots on target in their last six matches and conceded only nine on their goal which is a positive sign as the Italians focus on lifting a trophy, which has become a priority now the big domestic and European pots have disappeared.

Shakhtar, whose Champions League form looks strong given the top two in their group - Atalanta and Manchester City - reached the final eight of the elite competition. But they have played 11 matches in Europe this season and managed only one clean sheet.

That sole shutout came in a 3-0 win over Wolfsburg and ten featured at least three goals - the exception was a 1-1 draw at Manchester City.

They have had two 3-3 draws, beaten Basel 4-1 and lost 3-0 at home to City so excitement is never far away. Junior Moraes, Taison and Marlos are going to be tricky customers for Inter but the defence could find Lukaku even harder to nullify.

Seventeen of Shakhtar's last 19 European matches have featured over 2.5 goals