Injury-hit Ireland set to share the spoils with Iceland 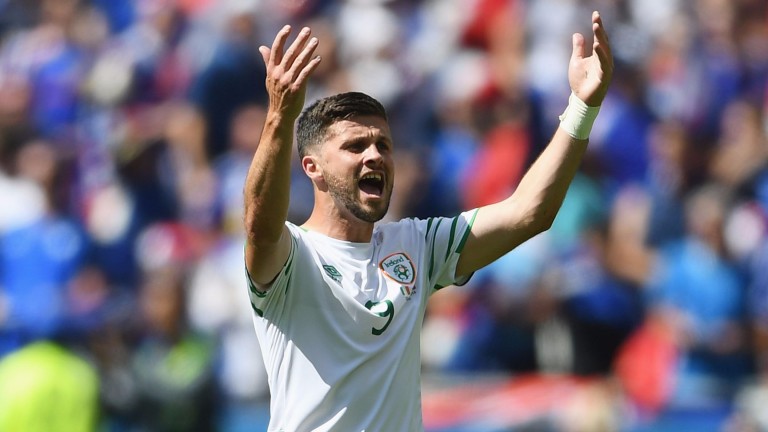 Ireland have not tasted defeat since Euro 2016 and can extend their unbeaten run to seven by holding Iceland to a draw at the Aviva Stadium.

Martin O'Neill steered his side to a 0-0 draw at home to Wales on Friday, ensuring they remain on track for a top-two finish on Group D.

There was an element of frustration at the final whistle after Ireland failed to make the most of playing against ten men for the last 24 minutes.

But given Ireland's significant injury problems, it looked a better result for them than for Wales.

O'Neill's selection against Wales was complicated by a suspension for Robbie Brady and injuries to Ciaran Clark, Shane Duffy, Wes Hoolahan, Harry Arter and Daryl Murphy.

Ireland's task got harder when James McCarthy was injured in the warm-up and Seamus Coleman suffered a broken leg due to a dreadful tackle from Wales defender Neil Taylor.

With McCarthy, Coleman and John O'Shea added to the injury list, O'Neill's hand is weaker and he is likely to rest several of his remaining first-choice players to preserve them for more important battles.

Uncapped trio John Egan, Conor Hourihane and Daryl Horgan should be involved at some point but even a second-string Ireland side should be competitive against the likely Iceland line-up.

Iceland are off to a strong start in World Cup qualifying and have taken ten points from the first 15 available. They don't seem to have been badly affected by the departure of head coach Lars Lagerback after Euro 2016.

However, like many small nations they rely on a core group of players and most of their big-hitters are likely to be benched in Dublin.

The last time Iceland played a friendly and a competitive game close together was in November, when they lost 2-0 away to Croatia in a World Cup qualifier before defeating Malta 2-0 in Valletta.

Head coach Heimir Hallgrimsson made ten changes for the Maltese match and, if he follows a similar approach, Iceland's chances of beating the Irish will inevitably recede.

Three of the 11 who started Friday's 2-1 victory away to Kosovo have left the squad, including star midfielder Gylfi Sigurdsson, who has netted 15 goals in 49 internationals.

The withdrawals leave the squad short of firepower. Midfielder Rurik Gillason and defenders Kari Arnason, Ragnar Sigurdsson and Sverrir Ingason are their leading scorers with three each.

Wolves forward Jon Dadi Bodvarsson looks set to lead the attack but he has scored only twice in 33 Sky Bet Championship matches this season.

Ireland have better quality strikers but the service to their front men could be lacking.

Until the red-card incident against Wales they never looked like scoring and it may be wrong to expect an improvement, given the likely understrength line-up.

There will be plenty of endeavour from fringe players keen to carve out a future at international level but quality could be sorely lacking from both sides and a stalemate looks the most likely outcome.

Iceland
Gylfi Sigurdsson, Arnor Traustason and Emil Hallfredsson have withdrawn from the squad since the 2-1 win away to Kosovo on Friday.