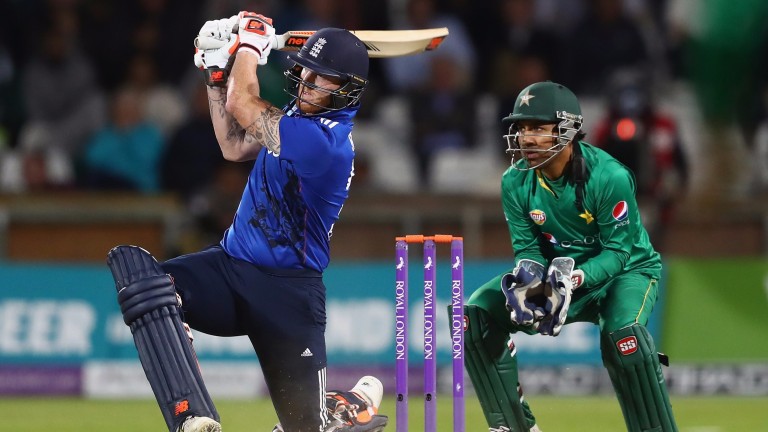 England's last crack at a major 50-over tournament ended in an ignominious group-stage exit but they are 11-4 favourites to make home advantage count in the ICC Champions Trophy.

Dramatic changes were required after the 2015 World Cup in Australia, where they finished fifth out of seven in their pool, beating only Afghanistan and Scotland.

Just six of the 15-man squad involved in the debacle down under will be representing England this time around and their new approach to one-day cricket is epitomised by Ben Stokes, who was controversially left out for the World Cup.

Stokes, named MVP at this year's Indian Premier League, balances the side beautifully, batting in the top six, bowling increasingly impressively and fielding like a gazelle.

A knee problem troubled him during the recent series against South Africa (although he still struck a quickfire century and dismissed Hashim Amla in the win at the Rose Bowl) and England will be desperate to have him fit and firing for, they hope, three group games, a semi-final and the final.

That two-run victory in Hampshire made it eight straight one-day wins for Eoin Morgan's side but their triumphant sequence came to a spectacular end at Lord's on Monday.

The Proteas blew a great chance of victory at the Rose Bowl, provoking predictable accusations of choking, but roared back at HQ, reducing England to 20-6 inside five overs on their way to a seven-wicket win.

Backers of England to lift the trophy will be relieved that they got that shocker out of the way in a dead rubber rather than a more significant fixture and the hosts remain the most likely winners of the tournament.

Opener Jason Roy is out of touch but Morgan, Stokes, Joe Root, Jos Buttler and the in-form Moeen Ali form a magnificent middle-order, with the brilliant Jonny Bairstow in reserve.

The return of Mark Wood, who conceded only four runs in the final over of the nerve-jangling win at the Rose Bowl, is a huge boost and Liam Plunkett, Chris Woakes and David Willey have performed to a high level in the last couple of years.

The pre-tournament money for England is understandable but their price now looks short enough given the fine margins in one-day cricket and 9-2 chances India could be the better value.

They are defending champions after England made a mess of their run-chase in a rain-reduced final at Edgbaston in 2013.

A year later they won their last bilateral ODI series in England 3-1, with the only defeat coming in a dead rubber, and they finally have a selection of fast bowlers to rival the perennial quality of their batsmen and spinners.

Mohammed Shami, Bhuvneshwar Kumar and Umesh Yadav are a formidable attack, as they demonstrated with combined figures of 7-86 as New Zealand were bundled out for 189 in last week's warm-up game at The Oval, and Jasprit Bumrah is another exciting option.

Ravindra Jadeja's left-arm darts tie down the batsmen in the middle overs and India's batting looks as strong as ever with skipper Virat Kohli and a resurgent Yuvraj Singh in the middle-order.

World champions Australia must be respected with David Warner and Steve Smith in the top three and Mitchell Starc spearheading the bowling attack.

However, they still seem to be searching for the right balance to their 11 and they have lost their last seven away ODIs, in South Africa and New Zealand.

South Africa need to do the damage at the start of each innings, with Hashim Amla and Quinton de Kock opening the batting and the thrilling talent of Kagiso Rabada with the new ball. A lack of batting and bowling depth could continue to cost them in tight games, however.

The same could be said of New Zealand, clearly a less intimidating outfit since Brendon McCullum's retirement, while Pakistan and Sri Lanka are also in a rebuilding process.

Outsiders Bangladesh are a fearsome one-day side at home and beat New Zealand in Dublin in their last ODI. The Tigers deserve their place in the tournament, ahead of a West Indies side in disarray, but it is hard to see them upsetting England, Australia and New Zealand in Group A.