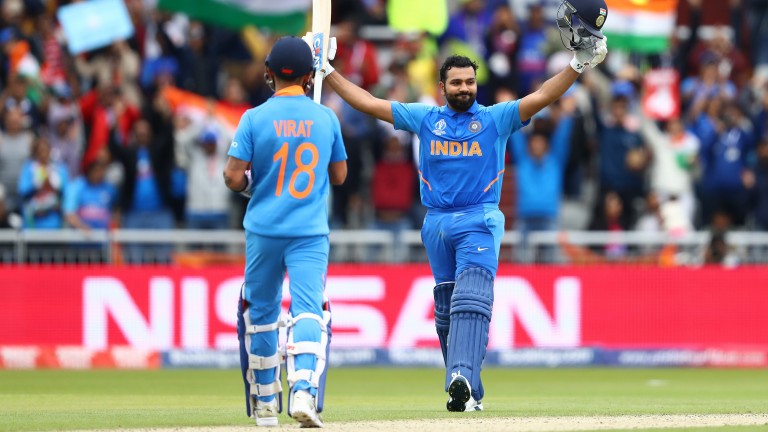 Some bookmakers are struggling to separate England and India at the head of their Cricket World Cup title betting - bet365 offer 2-1 about both - after Virat Kohli's side beat Pakistan by 89 runs on DLS in Manchester on Sunday.

India made 336-5 at Old Trafford, with opener Rohit Sharma smashing 140 off 113 balls and skipper Kohli cracking 77, from their rain-interrupted 50 overs after being asked to bat first by Pakistan captain Sarfaraz Ahmed. Rohit had been 10-3 with Sky Bet to top score.

Pakistan's chase had its good patches after Vijay Shankar stunned  Imam-ul-Haq with his first delivery after taking over from the hamstrung Bhuvi Kumar.

However, four wickets for 12 runs stymied their chances of success even before a long rain delay at 166-6 after 35 overs meant that a recalculated target of 302 from 40 overs was nigh on impossible.

India are 3-100 to make the semi-finals after moving up to third in the group-stage table with three wins and a no result from five outings while Pakistan are 14-1 to reach the last four and 100-1 to be champions after defeat left them down in ninth with one win and one no result from five games.

Rohit is now 3-1 favourite to be the top tournament runscorer after a second century took his running total to 319 from three innings.

Australia captain Aaron Finch, the 5-1 second-favourite, shows the way in the standings with 343 runs from five knocks.

Pakistan left-armer Mohammad Amir is now an 8-1 shot to be the top tournament wicket-taker after moving level with Mitchell Starc on 13 at the top of the standings courtesy of his 3-47.

Australia left-armer Starc, who shared the top-bowler honours with Trent Boult four years ago, is now a 4-1 favourite with Jofra Archer, who has nine scalps for England, at 7-1 and another Aussie quick Pat Cummins, 11 victims, at 8-1.

India duo Jasprit Bumrah and Yuzvendra Chahal, who both went wicket-less in Manchester but have running totals of five and six, are available at 10-1 and 14-1.

Amir was 10-3 favourite to be Pakistan's top wicket-taker at Old Trafford. Shankar, as big as 12-1, was India's top wicket-taker with those firms that settle on least runs conceded. Hardik Pandya and Kuldeep Yadav also took two wickets for bookmakers that use dead-heat rules.