In-form De Kock can deliver at 7-1 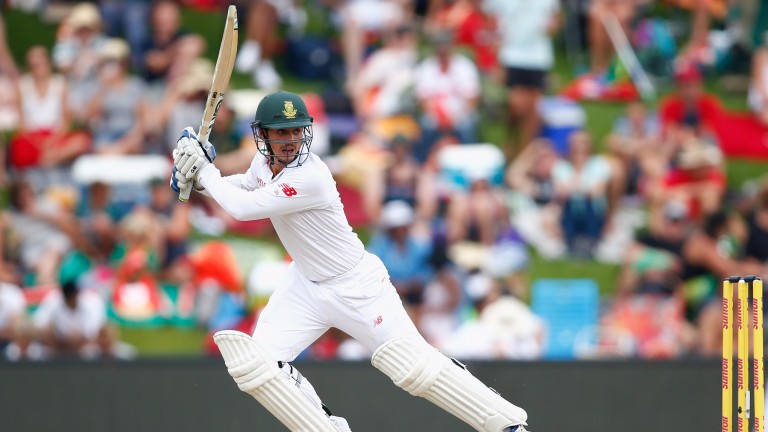 Quinton de Kock drives during his Test century against England
Getty Images
1 of 1
By Max Oram 10:08AM, NOV 3 2016

South Africa have won two, and drawn one, of three Tests against Australia in Perth since their readmission to world cricket and are tempting 2-1 shots for further joy at the Waca in the first of three five-dayers down under that starts tonight.

The Proteas won a recent ODI series between the teams 5-0. The brilliant Baggy Green left-arm strike bowler Mitchell Starc says he is still short of full match fitness following injury and while the quality of the home batsmen is not in doubt, the top-order jigsaw pieces are still being fitted.

However, South Africa kingpin batsman AB de Villiers, who hit second-innings centuries in the two victories and 422 runs in total at the venue, is sidelined for the series and Australia prioritised these Tests over the ODIs in the Rainbow Nation by leaving Starc and their first-choice fast bowling attack at home to prepare for this.

Last year’s Waca Test was a runfest of a draw with David Warner whacking 253, Ross Taylor tonking 290 and tons for Kane Williamson, Steve Smith, Usman Khawaja and Adam Voges. But traditionally bowlers have had their triumphs too and the best value bet looks to be the 7-1 about keeper-bat Quinton de Kock top-scoring in South Africa’s first innings.

Hashim Amla and Faf du Plessis have fond memories of Perth but De Kock, out of the initial firing line at number six or seven, hit 99 and 122 in the warm-up games and has compiled a ton and four fifties in ten Tests.