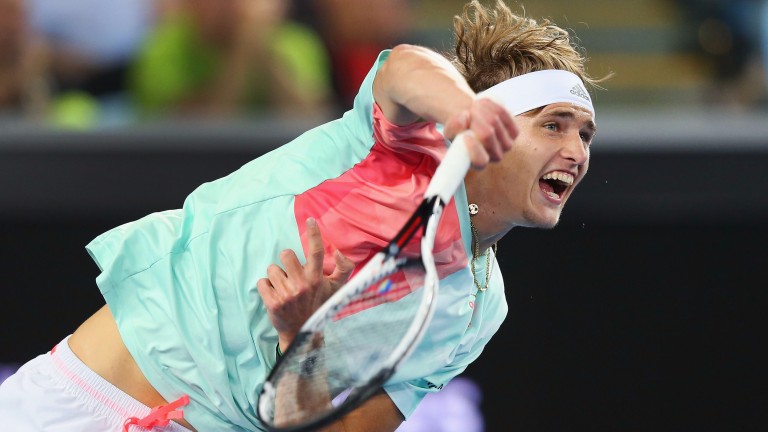 ATP Montpellier Open
Alexander Zverev is among the most promising young talents on the ATP circuit and the St Petersburg Open winner can claim another title at the Open Sud De France in Montpellier.

But Gasquet was below his best at the Australian Open, where he lost 6-3 6-2 6-4 to Grigor Dimitrov in the third round, and is in the same half of the draw as number-one seed and 4-1 shot Marin Cilic, who defeated him twice in 2016.

If Cilic and Gasquet remain below par, the tournament will open up and Zverev, who took two sets off Rafael Nadal in the Australian Open third round, looks the most likely to take advantage.

He is the class act in his quarter of the draw and will have no fears about a potential showdown with Cilic in the final, given he defeated the Croatian in both of their meetings last year.

A potential semi-final with 10-3 tournament favourite Jo-Wilfried Tsonga could be more problem­atic. Tsonga defeated Zverev 6-7 6-2 7-5 in Shanghai last October but Zverev is improving all the time and may be ready to turn the tables.

ATP Sofia Open
Grigor Dimitrov collected his first title since 2014 with a victory at the Brisbane International last month but the 25-year-old Bulgarian seems to be finally living up to his potential and can justify 9-4 favouritism at the Sofia Open.

Playing in front of a supportive home crowd should assist Dimitrov, who performed at a high standard in the Australian Open before losing 6-3 5-7 7-6 6-7 6-4 to a rejuvenated Rafael Nadal in the semi-finals.

There is nobody of Nadal’s quality in the Sofia Open field although top seed Dominic Thiem, defending champion Roberto Bautista Agut and world number 11 David Goffin will all fancy their chances.

However, all of them lost their most recent encounters with Dimitrov and would probably struggle to overcome the Bulgarian, who has won ten of his 11 matches this year.

Goffin is the 4-1 tournament second-favourite but has a losing head-to-head record against Marcos Baghdatis (2-4) and Bautista Agut (0-2), who may stand between him and a place in the final.

ATP Ecuador Open
Only three of the top 50 are in the Ecuador Open draw and a wide open tournament could go the way of Serbian wild card Janko Tipsarevic – a player who is full of confidence after victories in back-to-back January Challenger events in Bangkok.

Second seed Albert Ramos-Vinolas and third seed Paolo Lorenzi have obvious claims based on their respective tournament victories in clay court events at Bastad and Kitzbuhel in 2016.

They are the market leaders – Ramos-Vinolas edging favouritism at 4-1 and Lorenzi 5-1 – but both are in the bottom half of the draw.

The top half looks less competitive and features Tipsarevic – a one-time world number seven – who has a great chance of forging a path to the final and is each-way value at 10-1.

All of Tipsarevic’s ten wins this year have been against players ranked outside the top 100 but he recorded eye-catching victories over Benoit Paire and Philipp Kohlschreiber in the autumn and is getting back to a level which should allow him to be competitive this week.