Improving Wakefield could be ready to rise to cup challenge 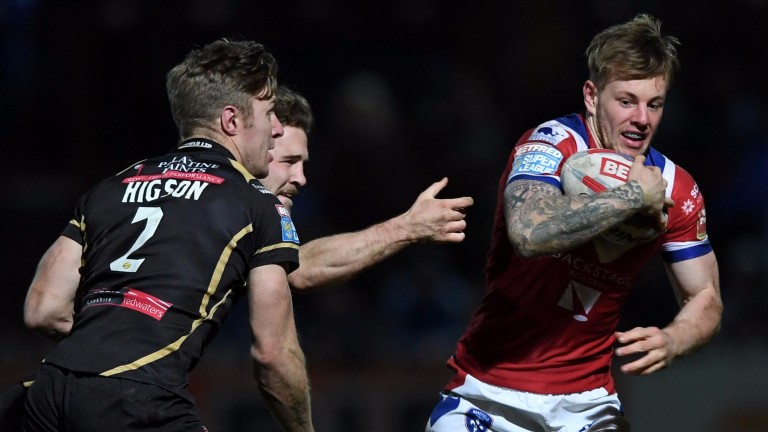 Tom Johnstone of Wakefield (right) evades the attentions of Leigh players
Gareth Copley
1 of 1
By Rod Studd 7:57PM, MAY 10 2017

It's tight at the top of the Betfred Super League with just two points separating the top four teams and the betting is wide open for the Ladbrokes Challenge Cup at the last-16 stage.

Racing Post Sport followers are in good shape with Leeds, who were advised at 10-1 for Wembley glory, now half that price after being drawn at home to third-tier Barrow.

The Rhinos, who have reached five of the last seven finals and won twice, are on a run of eight wins in ten games and should give punters a run for their money.

Wigan, 19-time Challenge Cup winners, are the bookmakers' 7-2 favourites before their trip to Championship strugglers Swinton, who produced a stun­ning upset by ousting Hudders­field in the previous round.

The Warriors should coast into the quarters but their extensive long-term injury list makes Shaun Wane's side a poor proposition for Wembley glory at the price.

Last year the Warriors lost in the semis to Hull, who went on to lift the cup, and the Black & Whites are 15-2 to retain the trophy. They are considerably shorter odds than they were this time last year.

With a potentially tricky tie at home to Catalans, Lee Radford's team are passed over and so, reluctantly, are table-topping Castleford, whose odds have contracted from 16-1 in the off-season to 11-2.

Castleford are an outstanding side but must first see off St Helens, who defeated the Tigers in Super League last month. Perhaps Daryl Powell and co will make the league Cas's number one priority.

It may just be worth casting an eye further down the list and chancing a wager on Wakefield at 25-1.

Trinity haven't won the trophy since 1963 but reached the semi-finals last year and have certainly improved since then.

Chris Chester's team sit sixth in Super League and have what should be a comfortable opening assignment at Dewsbury, who are second from bottom in the Championship.

A victory would put Wakefield into the quarter-finals and a favourable draw in the last eight would put their backers in a strong position.

It's more than three decades since Featherstone's finest hour in the Ladbrokes Challenge Cup when they upset Hull as rank underdogs in the legendary 1983 final but the carrot of a quarter-final berth is a significant one for the Championship club.

Rovers host fellow second-tier side Halifax and the layers make Jon Sharp's side 4-9 to repeat their 32-26 opening weekend win at Halifax in February.

The sides scored five tries apiece in that meeting - the match was decided by goal kicking - and three of the previous four clashes have been settled by six points or fewer.

This could be close again and with Fax having won their last seven games the preference is for the visitors with an eight-point start.

It could also be worth taking a punt on the pitch. Post Office Road has a significant slope which lends itself to second-half comebacks, so backing one team to lead at half-time and the other to win the match may pay dividends.