Improving Oldham can get a result at Bury 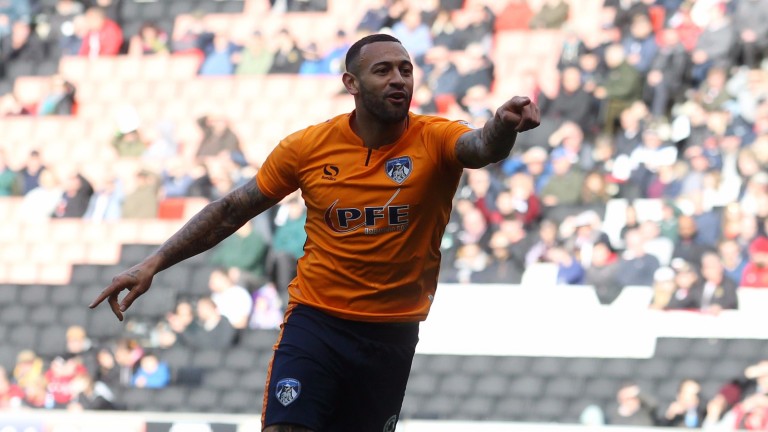 Bury v Oldham
It is getting tight in the Sky Bet League One relegation scrap and 18th-placed Oldham can do their prospects a power of good by beating basement boys Bury at Gigg Lane.

Extra spice is added to the game with it being a local derby and Oldham expect to have more than 2,200 fans at the game.

The large travelling contingent should be a big help to the Latics, who go into the match high on confidence having taken ten points from their last four games.

Oldham won 2-0 at Scunthorpe last Saturday, lifting them out of the drop zone for the first time since January.

It was a tight game at Glanford Park but Oldham boss Richie Wellens made a couple of excellent substitutions, sending on Eoin Doyle and Patrick McEleney and watching them both grab goals.

Doyle's goal was his 14th in 18 league appearances this season and his recent return from injury is a huge boost to Oldham's survival hopes.

The 29-year-old is in line for his first start since December and that signals trouble for Bury, who are in desperate need of a victory.

There has been a significant improvement from the Shakers, who have won three, drawn three and lost one since Ryan Lowe took over as manager in January.

But they are still in deep trouble, nine points adrift of safety, and are running into Oldham at the wrong time.

Ipswich v Sheffield United
Ipswich have been doing just about enough to keep their slim Sky Bet Championship playoff hopes alive and they can edger closer to the top six by beating Sheffield United at Portman Road.

Mick McCarthy isn't always the flavour of the month with Town fans but he continues to do a good job on a modest budget and has steered his team into the top half after back-to-back away wins against Preston (1-0) and Sheffield Wednesday (2-1).

The Tractor Boys have not won three games in a row since August but they look overpriced to do so against the Blades, who were humbled 3-0 at Fulham on Tuesday.

Sheffield United were in the automatic promotion places in mid-November but have struggled since, winning five, drawing four and losing nine of their last 18 games.

They look poor-value favourites against an Ipswich side gaining in confidence.

Burton v Bristol City
Backing away teams at Burton has been a profitable strategy this season but punters should think twice before siding with odds-on favourites Bristol City at the Pirelli Stadium.

Burton haven't won a home game since September but they are still competitive in the struggle for survival and are only three points adrift of safety.

The Brewers are going to need some more home wins if they are to stay up but their chances this weekend are enhanced by the absence of two suspended Bristol City defenders - centre-back Aden Flint and left-back Joe Bryan.

Both are influential for the Robins, who have had a major dip in 2018, winning only two of 11 league matches.

City dropped out of the top six after Tuesday's 2-1 loss at Preston and it may take them a while to get back in.

It remains to be seen whether the Wednesday players - many of whom are used to contesting playoff semi-finals and finals - have the stomach for a relegation fight.

Bolton are an honest side who have been scrapping away all season and they will fancy their chances of taking at least a point.