Plus Kevin Pullein's bet on the day 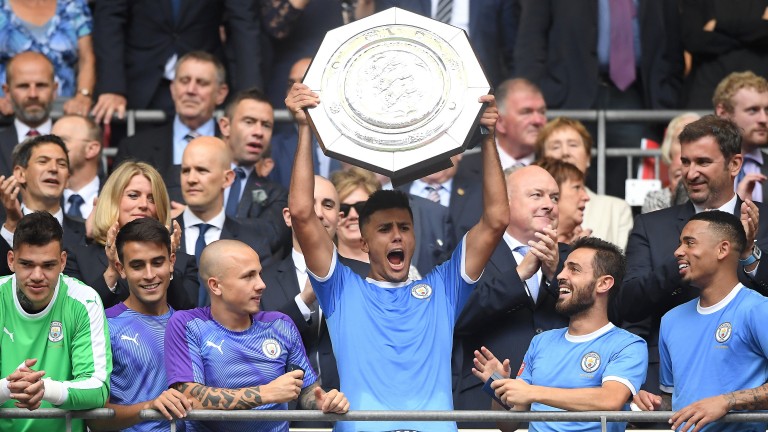 Will Manchester City and Liverpool become runaway leaders in the Premier League as they did last season? If they do there is an implication for who wins.

In the first match of the season Liverpool beat Norwich by three goals. In the second City beat West Ham by five goals. On Wednesday, though, Liverpool were held by Chelsea over 120 minutes in the Super Cup. City play Tottenham on Saturday, who last season knocked them out of the Champions League.

In each of the past two seasons City became champions winning all but six of their games. Last season runners-up Liverpool won all but eight. In the ten seasons between 2007-08 and 20016-17 the average number of games the Premier League champions did not win was 11.

The gap between the best and the rest widened. It could get wider, stay the same size or narrow. And what happens will influence who finishes first.

If in any league there are two teams who are clearly better than the rest certain consequences follow.

Peterborough can go on the attack

Peterborough could have more of the attacking play in their League One game at home to Ipswich than bet365 envisage.

Back Peterborough +1 Asian handicap corners at decimal odds of 1.85, equivalent to slightly better than fractional odds of 5-6. If Ipswich win the corners count by two or more the bet will fail, if they win it by one stakes will be refunded, and if anything else happens the bet will succeed.

The chance of a payout might be better than the odds anticipate.

Generally, as I am have said before, there is a relationship between goals scored and conceded and corners for and against. Both are occasional consequences of attacking play. Goals are what attackers want, but sometimes corners are what they get before or instead.

In each of the past four seasons Peterborough have taken a smaller share of the corners in their matches than is usual for teams with their share of the goals. In their first two league matches of this season, though, Peterborough won the corner count 4-2 at home to Fleetwood then 9-3 away to Oxford.

So has the abnormal corners pattern come to and end? It is far too early to say with any confidence but at the odds it is worth taking a chance that the answer is yes. Even though Peterborough lost the goals count in both those games – against any given opponents a team are more likely to take most corners if they lose the match than if they win.

Let’s go back to the beginning.

In League One ante-post markets Ipswich, newly relegated from the Championship, were second favourites for the title and Peterborough fourth favourites. This suggested both teams were likely to be among the best in the division, with the Tractor Boys slightly better than the Posh. And they might still be despite Peterborough’s horror start. Today Peterborough will benefit from ground advantage.

Over the past two decades in Football League games with similar goals expectations fair decimal odds about the home team +1 Asian handicap corners would typically have been 1.5. Today fair odds would be bigger, probably a lot bigger, but perhaps not quite as big as 1.85.