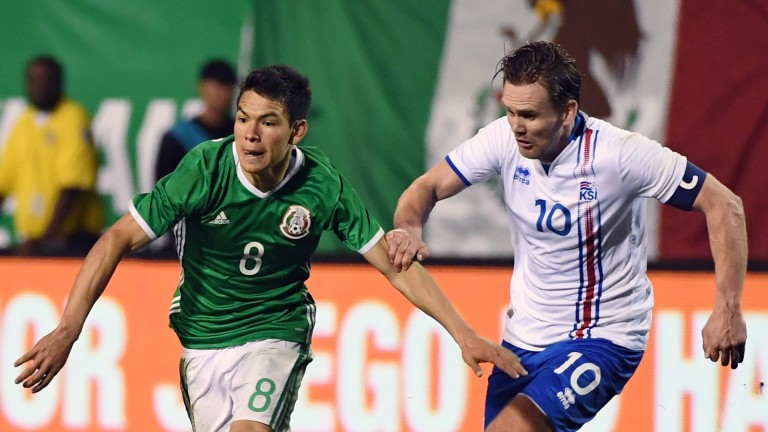 David Thor Vidarsson (right) is a key component of the Hafnarfjordur team
Ethan Miller
1 of 1
By Dan Childs 4:07PM, JUN 26 2019

Hafnarfjordur have gone four matches without a victory in Iceland's top flight but they look solid favourites to post a home win over Grindavik in the quarter-finals of the Icelandic Cup.

Since the turn of the century Hafnarfjordur have established themselves as one of the top teams in Iceland.

They won the league title eight times between 2004 and 2016 but they have not been as prolific in the Icelandic Cup, lifting the trophy just twice in 2007 and 2010.

However, head coach Olafur Kristjansson has promised to go all out to win the cup this season because the chances of winning the league are already remote.

Kristjansson's side lost 2-1 at home to leaders KR on Sunday, leaving them 11 points adrift of the summit. But he will have been encouraged by a much-improved second-half performance.

Key Hafnarfjordur midfielder David Vidarsson has been suffering from a knee injury and was only fit enough for the bench, but he went on after half-time and was credited by Kristjansson for sparking an significant improvement in their performance.

Vidarsson may be ready for a starting role in the cup and that would be bad news for Grindavik, who have no great pedigree in the competition.

Grindavik have contested the Icelandic Cup final just once, losing to KR in 1994.

They are only two points below Hafnarfjordur in the league but have lost their last two league games and may be heading for another poor result.