Hungry Wolves are on the up 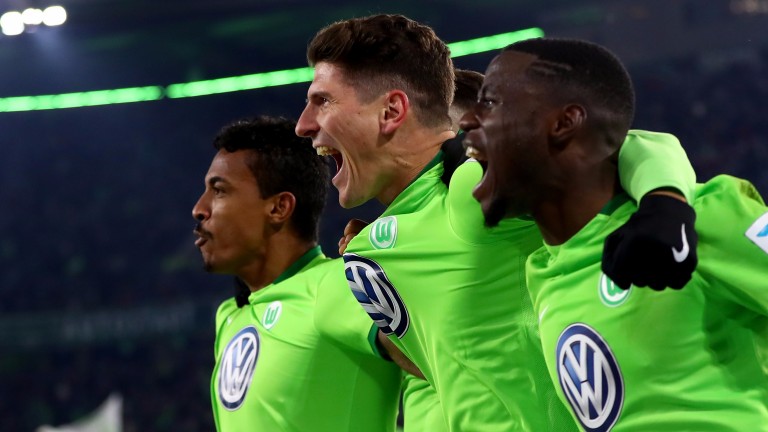 Wolfsburg v Augsburg
It was a mainly miserable first half of the Bundesliga campaign for Wolfsburg but they have shown signs of recent improvement and look fair value to make it four wins on the spin against Augsburg.

Being stuck down in 12th is a poor return for a side who reached last season's Champions League quarter-finals. They have fired sporting director Klaus Allofs and manager Dieter Hecking but that has only added to the mess at the Volkswagen-backed club.

It is widely anticipated that the car giants will be putting less money into the Wolves after the emissions scandal cost the company billions and yet despite all of that the current squad should still be able to compete in the top half of the Bundesliga.

The wins over Eintracht Frankfurt, Borussia Monchengladbach and Hamburg either side of the winter break suggest that is the case, while the sale of Julian Draxler to Paris St-Germain earlier in the month may actually be a blessing.

Draxler was Wolfsburg's best player but he became a problem after demanding to leave in the summer. That request was turned down but Draxler performed poorly and failed to score in the Bundesliga.

Replacements Yunes Malli, an excellent performer for Mainz, and Paul-Georges Ntep, who assisted Mario Gomez's winner on his debut last week, are superb signings that should improve a side who still possess plenty of talent.

The visitors have struggled to find their identity after the summer departure of ace coach Markus Weinzierl to Schalke and have scored only three goals in their last seven matches.

There is not much between the teams in the Bundesliga (Wolfsburg are one point ahead) and the hosts just edge the all-important shot data so from that point of view the prices for this match are spot-on once home advantage is added to the equation.

However, there could be serious improvement to come in Wolfsburg and the same can't be said for the visitors.

Crystal Palace v Man City
Backing Manchester City should always come with a wealth warning but Pep Guardiola's side were easy winners away to Premier League opponents in round three of the FA Cup and should comfortably make it through round four at Selhurst Park.

West Ham were hammered 5-0 earlier this month as Guardiola made his intentions clear by sending out a strong first 11 at the London Stadium and more capital punishment could be heading the way of Crystal Palace, who may not be as focused on this competition.

Palace have slipped into the Premier League relegation zone and face two monumental fixtures next week with Tuesday's trip to Bournemouth followed by a crunch six-pointer at home to Sunderland.

Sam Allardyce selected a weakened team in the third round when Palace edged out Bolton at the second attempt and in seven games under their new boss that comeback replay success is the only win.

Palace were dominated by Everton at Selhurst last week and their wobbly defence could collapse against City.

It is almost impossible to believe City only drew 2-2 against Tottenham last week after producing the best Premier League performance of any side this season and it is surely a matter of time before lady luck starts smiling on Guardiola.

City have conceded six goals from the last six shots on target they have faced but somebody will get a hiding soon. It may well be Palace.

Stevenage v Grimsby
Loan signings can make a major impact in the Sky Bet Football League and Grimsby look to have borrowed a good one in the shape of Manchester United goalkeeper Dean Henderson.

Since swapping Old Trafford for Blundell Park the 19-year-old has played six times with Grimsby winning four, drawing one and losing against Exeter, with four clean sheets in the process.

There is no shame in the Exeter defeat as the Grecians have been absolutely rampant lately and Grimsby recovered well to beat Notts County easily last week.

Omar Bogle scored his 19th Sky Bet League Two goal of the season in that victory and it is debatable whether the Mariners deserve to be underdogs for the trip to Stevenage.

Boro, who have lost seven of their last nine league games, managed one shot on target in a woeful 2-0 defeat at Hartlepool last week with boss Darren Sarll so "disgusted" he had the players in for training at 8am on Sunday.

Banker
Manchester City 1-2
Pep Guardiola's side seem to be getting punished for every tiny mistake, while in the final third they are passing up great opportunities. However, that will change sooner rather than later and City should see off a potentially weakened Crystal Palace.

Blowout
Carlisle 19-20
It's only two wins in ten for Carlisle and their last league clean sheet came in early October. Visitors Barnet have lost three of their last 15 league outings.

Hotshot
M Pavlovic 22-1 bet365
Angers centre-back Mateo Pavlovic was used as a striker last week and scored the opening goal away to St-Etienne. It is unclear whether he will be deployed up front again at home to Metz but at the prices it is worth paying to find out at 22-1 each-way.

Two weeks ago in this column I suggested Kieron Freeman was a good bet at 25-1 to score first and 10-1 to net at any time for Sheffield United. I backed him and he didn't score. Last week I didn't tip him and I didn't back him and he scored.

I cursed as his name popped up on the Sky Sports ticker and moaned about my terrible bad luck but I was free to back Freeman and didn't. Ultimately, it was my decision that cost me.

Earlier this week Charlton manager Karl Robinson spoke very honestly on Talksport about his various run-ins with officials and admitted he had been into the referees' room after matches and basically told them it was the officials' fault if he got the sack.

This follows on from the much-publicised foul-mouthed John Sheridan rant during Notts County's defeat to Wycombe, when among many things he blamed the officials for a lack of Christmas presents heading to his kids on the basis that he would be sacked.

That was Sheridan's fifth league defeat in a row and he was allowed another four straight losses before being shown the door at County.

Managers are under a lot of pressure but part of their job is to deal with that stress. If I owned a club I wouldn't go near these pitiful gaffers who are constantly blaming referees because ultimately most of them get themselves the sack with poor decision-making.