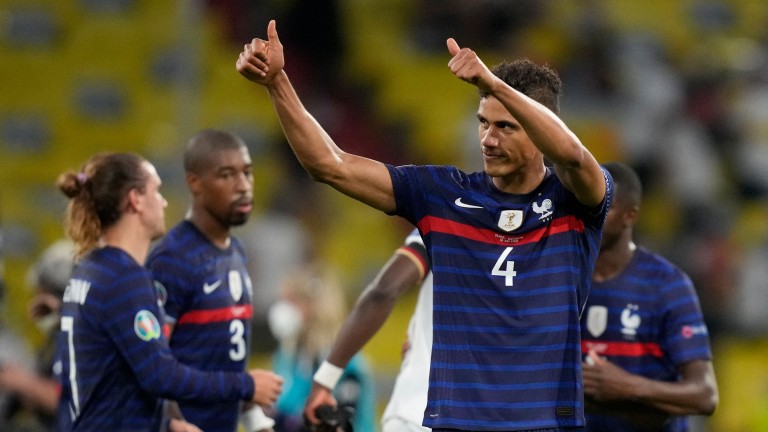 Hungary
Daniel Gazdag has been ruled out of the tournament but manager Marco Rossi has no other injury concerns.

France
Les Bleus could name the same 11 who started against Germany as long as Benjamin Pavard passes the concussion protocols.

World champions France kicked off their Euro 2020 campaign with a victory over Germany in Munich and they are unlikely to be rattled by a packed house at the Puskas Arena in Budapest.

Hungary were minutes away from claiming an unexpected point in front of 67,000 spectators in their opening Group F game against Portugal.

Indeed, fans of the not-so-mighty Magyars briefly thought they had taken the lead against the European champions before substitute Szabolcs Schon's strike was ruled out for offside.

Portugal then struck ruthlessly with three late goals, leaving Hungary to reflect on an unkind margin of defeat and look forward to their daunting clashes with France and Germany.

Ominously for the section minnows, France made the Germans look pretty ordinary in their opening game.

The teams were separated only by Mats Hummels' 20th-minute own goal at the Allianz Arena but Les Bleus oozed class and their performance vindicated Didier Deschamps' decision to recall Karim Benzema from the international wilderness.

Benzema and Kylian Mbappe both had goals chalked off due to tight offside calls and the Real Madrid striker, along with Barcelona star Antoine Griezmann, gave a masterclass in defending from the front.

Mbappe's offside 'goal' was a brilliant finish, a reminder of the dazzling individual quality in the French squad, but they also showed their discipline, unity and stomach for the fight against Germany.

It may not be a vintage German side but they still had an 11 packed with World Cup and Champions League winners and France held them at arm's length impressively during the second half.

Centre-backs Raphael Varane and Presnel Kimpembe dealt with almost everything that came into the box and Bayern Munich left-back Lucas Hernandez, playing in his home stadium, defended well and set up the Hummels own goal.

Hungary's dogged display against Portugal, who broke the deadlock thanks to a deflected goal in the 84th minute, should ensure there is no complacency in the France camp and a win to nil for the favourites looks the best bet.

They have won their last five internationals without conceding a goal and the way their team of superstars mucked in and defended as a unit against Germany bodes well for their chances of following their World Cup triumph with victory at the Euros.

France have won their last five international matches to nil.

Under 9.5 corners
France took only three corners in their win over Germany and Hungary won none of the six flag-kicks in their clash with Portugal.

Second half to produce more goals
Portugal scored in the 84th, 87th and 92nd minutes against Hungary, whose defence could be stretched by Les Bleus' pacy forwards late on.

Antoine Griezmann to score at any time
Griezmann has notched in four of his last six internationals and Didier Deschamps has confirmed that the Barcelona man is on penalties.