Black & Whites can scramble to victory 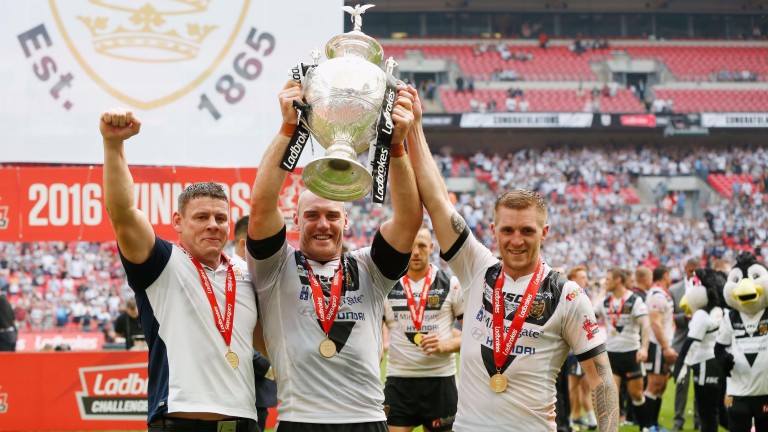 Hull and Wigan contested the greatest Ladbrokes Challenge Cup final ever staged at Wembley in 1985, the worst in 2013, and if the odds are any guide, they could contest the closest this time.

Bookmakers are struggling to separate the teams but Paddy Power are dangling a carrot by offering a standout 5-4 about holders Hull becoming the fourth team to retain the trophy since the event returned to Wembley in 2007.

Wigan justified favouritism in that final 32 years ago and the rain-ruined event 28 years later but this could be Hull's day just as it was 12 months ago when they finally managed to win at Wembley at the ninth attempt.

That epic comeback victory against Warrington should give Lee Radford's men plenty of confidence as they look to make it a hat-trick of wins over the Warriors in 2017.

The Airlie Birds held off a fightback from an understrength Wigan side to win 22-20 at the DW Stadium in March and then eased to a comfortable 39-26 victory at the KCom Stadium ten weeks later.

Lee Radford's team sit four points and three places above today's rivals on the league ladder and Wigan's status as fractional favourites seems to be based on the fact that many of their stars are back in action following injury absences early in the season.

Warriors big-hitters Sam Tomkins, Sean O'Loughlin, John Bateman, Liam Farrell and Anthony Gelling all returned for the Cup quarter-final at Warrington in June, one of seven wins in the last ten games for Shaun Wane's men.

That sounds impressive but the only top-four team Wigan have beaten during that run are Leeds, who fielded a virtual reserve side the week before the Challenge Cup semi-final.

The Warriors have been workmanlike rather than impressive in most of their wins and if Hull bring their A game to the big stage, the Black & Whites should be celebrating at full-time.

Hull's best performances this year have been at a higher level than anything Wigan have produced in 2017.

They boast two defeats of runaway table-toppers Castleford and produced cup masterclasses against Cas and Leeds on the road to Wembley.

Something similar to those displays will make the 5-4 about a Hull triumph look a very big price indeed.

The worry is that the Black & Whites are much more prone than Wigan to throw in an occasional shocker, as they did last Friday when hammered at home by Huddersfield 46-18.

That was the fourth time this season the Airlie Birds have shipped more than 40 points although on this occasion Jamie Shaul, Scott Taylor and 19-try top scorer Albert Kelly were all absent and the trio should return today.

While Hull to win is the value bet, there may be merit in a saver on Wigan recovering from a half-time deficit at 15-2.

The Black & Whites led 18-0 at the break and hung on to win by two points in the first meeting this year and had a 26-4 interval advantage in the second game before getting home 39-26.

Wigan's 16-0 win over Hull four years ago produced the lowest total tally in a Challenge Cup final since rugby league adopted four points for a try in 1983 but punters shouldn't necessarily be in a rush to go under in the total points market. Bookmakers have set the line at between 40 and 42 points.

Wembley was drenched by a deluge that day and even including that extraordinary scoreline, the average number of points posted in ten finals at the new Wembley stands at 38.

Five of those finals made up under today's line, four over and Warrington's 25-16 win over Huddersfield in 2009 ended up right in the middle of the quotes.

No matter how many points are scored, the match will be decided today after the Rugby League scrapped a replay in favour of 'golden point' which will come into play if the game is level after 80 minutes. That's a 20-1 chance.

Hull were the last team to win after a replay way, in 1982, and after waiting decades for that first elusive Wembley win, the Airlie Birds can make it two triumphs in 12 months at the iconic venue.