How Norman almost defied odds of 500-1 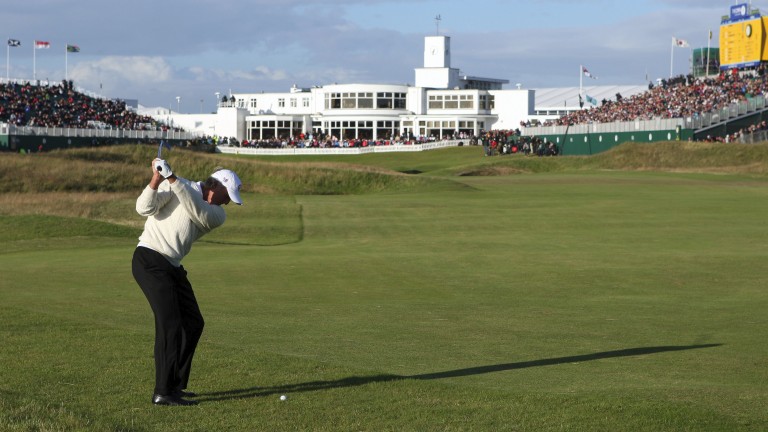 Everybody remembers the great Tom Watson, just two months shy of his 60th birthday, getting within one putt of winning his sixth Claret Jug at Turnberry in 2009.

One of golf's greatest fairytales was on the line if he could pull it off. He couldn't but 12 months earlier, at Royal Birkdale where this year's Open tees off on Thursday, an age-defying feat in some ways even more surprising was about to unfold.

Admittedly, Greg Norman was six years younger than Watson but, unlike the American, who was a Champions Tour regular, the 53-year-old Shark was a yesterday's man who'd virtually hung up his clubs, spending more time on the tennis court than on the golf course.

A humbling collapse at the 1996 Masters, shooting 78 to Nick Faldo's 67 after going into the final round six ahead, seemed to knock all the confidence out of him.

Norman was known as the prince of chokers after leading all four Majors going into their final rounds in 1986 - the media cruelly called it the Saturday Slam - but he managed to lose three of them. The Open at Turnberry was his lone success. And he never did win a Major in the States.

He handed the Masters to Jack Nicklaus by carving his second shot at the last into the crowd. He shot 75 in the last round of the US Open. And Bob Tway holed a bunker shot to beat him in the PGA.

You might say 'well, you can't blame him for that one', to which the reply is "but Norman led by four with nine to play".

Then there was that Troon playoff with Mark Calcavecchia and Wayne Grady in 1989 when he drove into a fairway bunker he didn't think he could reach, then airmailed his recovery shot over the green, into the clubhouse grounds and out of bounds.

It wasn't always Greg's fault. The 140ft chip-and-run with which Larry Mize stole the 1987 Masters playoff was Lady Luck playing another trick on our hero.

Away from the Majors, Robert Gamez had holed a 176-yard seven-iron at the last to deny Norman the Nestle Invitational at Bay Hill.

They tagged him the Great White Shark when he first arrived in the States in the early 1980s. But after that 1986 fiasco, the journos had another name for him - the Great White Fish Finger.

Beset by lingering hip, shoulder and back problems, he had also had knee surgery and showed little interest in supporting the roundbellies' circuit or playing any sort of competitive golf.

Maybe he thought that after 331 weeks as world number one, it was beneath him. Unlike Watson with his gap-toothed Huckleberry Finn grin, Norman was harder to love. For a start, he always seemed to have a tip for himself.

Quite suddenly, he stopped winning or contending. Even top-five finishes were sparse after the millennium.

Then, whoosh, he turns up under the radar at Birkdale with his new wife, tennis icon Chrissie Evert. He had entered the Senior Open at Troon the week after the Open (later to finish an honourable fifth) and wanted links practice on a course where he could put up a decent show before heading up to Scotland.

Birkdale, where he had finished ninth and 16th in previous Opens, fitted the bill perfectly. Even so, a 500-1 quote did not find many takers.

The weather was brutal, particularly on the Saturday, but patient Norman was still showing the links mastery that had won him two Opens. He led by two going into Sunday, with Padraig Harrington and KJ Choi his nearest challengers. Opening up with dropped shots at the first three holes quickly wiped out that advantage but he battled back to be still one to the good going into the back nine.

In the next two hours and with Pod playing like a god down the stretch, Norman's race was run. He shot 77 for a share of third place. If the idea was to impress his new lady, it was a mighty achievement and won him a whole new generation of admirers.

Incidentally, Norman thinks, or did in the 1980s, that betting on golfers stinks. "Those bookies treat us like we were cattle," he wailed. Er, no, Greg. Try 'horses' maybe?