Tottenham can crank pressure up on Guardiola 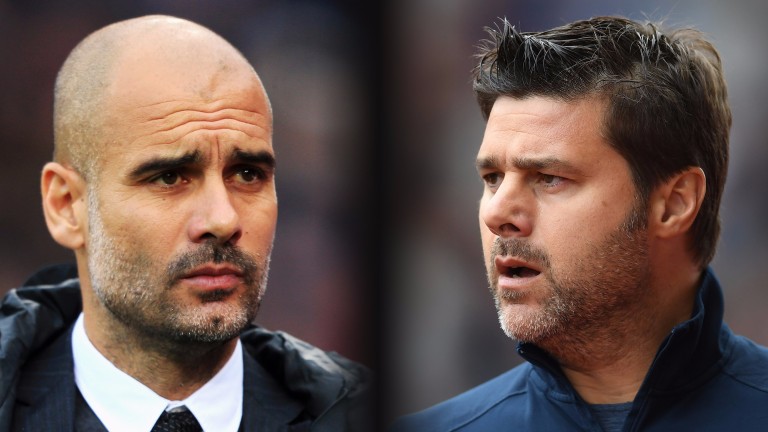 Pep Guardiola (left) and Mauricio Pochettino clash at the Etihad on Saturday
Getty Images
1 of 1
By Mark Langdon 4:01PM, JAN 20 2017

Pep Guardiola took his squad on a midweek team bonding trip to the cinema but only those living in La La Land could confidently back Manchester City to overcome Tottenham at the Etihad Stadium.

The pressure on Pep could barely be higher after he suffered the heaviest league defeat of his managerial career in Sunday's 4-0 loss at Everton, a result which saw City slip out of the top four and fall a whopping ten points behind leaders Chelsea.

Guardiola, who has already conceded the title, was happy to talk up "brilliant" Tottenham in his pre-match press conference and now faces the very real prospect of losing to the same team twice in a league season for the first time as a manager.

A Tottenham double over City - Spurs were 2-0 winners over the Manchester outfit in October - would send out a serious title warning to the rest of the Premier League but a better bet could be to take the visitors to notch before 59 minutes have been played.

That way punters are protecting themselves in case City's slick attacking unit, potentially improved with new signing Gabriel Jesus making his debut, get to work as well as taking direct aim at the clear weaknesses in Guardiola's rickety rearguard.

Goalkeeper Claudio Bravo's problems have been well-documented but he has not received much protection and that is unlikely to get better with Vincent Kompany working his way back to full fitness, while Fernandinho remains suspended.

City have managed only four clean sheets in the Premier League and often start big matches slowly. Guardiola's men were caught cold inside ten minutes of their December clashes with Arsenal and Liverpool.

One of Guardiola's greatest strengths is his ability to adapt and find solutions to problems - let's not forget he won a Champions League final at Barcelona with Yaya Toure as a centre-back - but the City players are clearly taking longer to grasp what he requires.

Tottenham are another couple of seasons down the line under Mauricio Pochettino and look a team in complete control.

They are second in the table and seem to thrive on the big occasion.

Spurs ended City's perfect start to the league season and Pochettino's men also knocked Chelsea off their perch as they closed in on the consecutive Premier League victories record.

The loss of defender Jan Vertonghen is a hammer blow to the Londoners and yet in Hugo Lloris, Toby Alderweireld, Victor Wanyama and Mousa Dembele the Spurs spine is their strongest for many years.

Marauding full-backs Kyle Walker and Danny Rose have been given even more freedom since Tottenham switched to a wing-back system and the front three of Christian Eriksen, Harry Kane and Dele Alli are all in sizzling form.

Spurs fired blanks in a 1-0 loss at Old Trafford on their last visit to Manchester but that is the only time in 12 Premier League games that Tottenham have failed to notch before the hour mark.

Tottenham
Erik Lamela and Jan Vertonghen are missing for Tottenham.