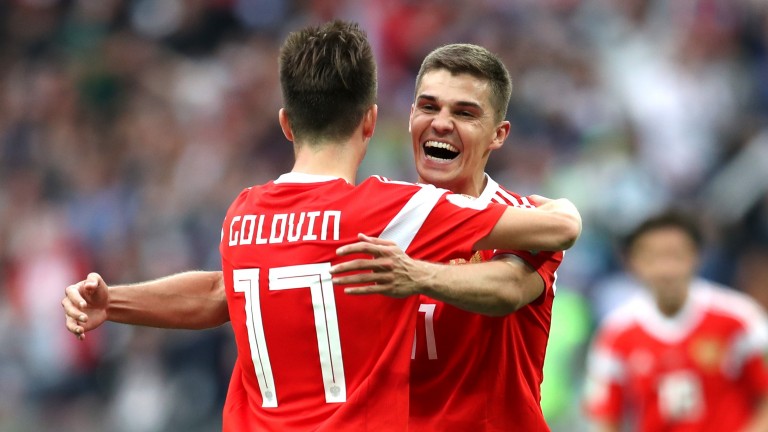 Hosts Russia got the World Cup party started in fine fashion with a 5-0 thrashing of Saudi Arabia at the Luzhniki Stadium in Moscow.

There had been fears that Russia could be the worst team ever to play in their own World Cup but Stanislav Cherchesov's side made the perfect start and were cut to make it through to the last 16.

Russia are as short as 1-6 to qualify for the knockout phase, although Sky Bet offer 1-3 and the hosts can now be backed at 7-4 to top Group A with Uruguay and Egypt also in the section.

Goal difference is the first tiebreaker should teams finish level on points and Russia were boosted in that department by their dominant display, capped by a couple of late goals to send the Moscow natives wild.

Tougher tests are sure to come with Russia 66-1 from 80-1 to win the World Cup and Tuesday's fixture against Egypt may give a more reliable guide as to their overall chances.

However, Cherchesov's 4-9 pre-match favourites could do no more than beat the opposition in front of them and the result rarely looked in doubt from the moment Yuri Gazinskiy, a 22-1 shot to open the scoring, broke the deadlock on 12 minutes.

Substitute Denis Cheryshev doubled Russia's advantage before the break and fellow replacement Artem Dzyuba added a third after 71 minutes. Cheryshev grabbed the pick of the goals late on and there was still time for Russia's golden boy Aleksandr Golovin to score a free kick before the full-time whistle.

Cheryshev was only on the pitch following an unfortunate injury to Alan Dzagoev and the winger was still trading at 150 on Betfair's exchange to finish as the top tournament goalscorer despite his dazzling display.

For all the positivity surrounding Russia, Saudi Arabia were dreadful, failing to register a shot on target, and they are 1-7 with bet365 to finish bottom of Group A. Betway offer 4-5 that they fail to score during the tournament and 10-11 that the Saudis find a route to goal.

Egypt have been given a massive boost with the news that star man Mohamed Salah is available to feature against Uruguay today, while Marcus Rashford is expected to return to training on Friday in preparation for England's clash with Tunisia on Monday.

William Hill are running a perfect hat-trick competition coupon every day throughout the World Cup with prizes up to a £1m.