Hornets can sting but not sink Gunners 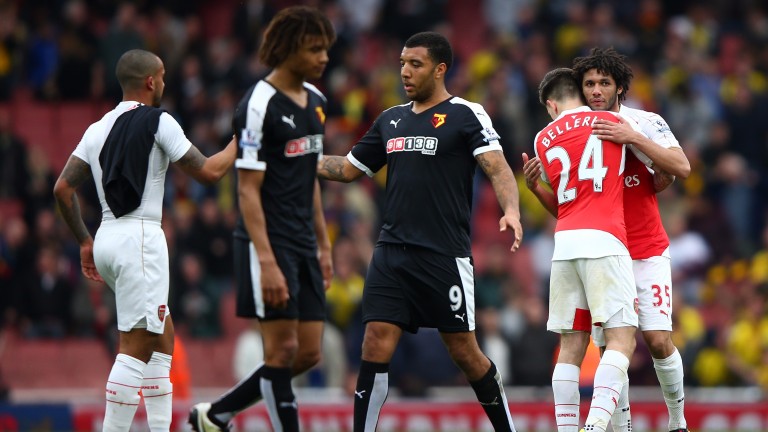 Verdict
Watford created few chances in a 1-0 loss at Millwall on Sunday but are likely to pose more of a threat to Arsenal. The Gunners are likely to win the game but there could be a danger of complacency with a massive clash coming up against Chelsea on Saturday.

Finding a way through Watford’s shaky defence should be easy enough but the visiting side are capable of scoring a consolation goal.

Team news
Arsenal Mesut Ozil, Francis Coquelin and Aaron Ramsey returned to training yesterday and should be available. However, Granit Xhaka is suspended.

Watford Jose Holebas and Mauro Zarate are suspended but M’Baye Niang could make his Watford debut. Valon Behrami (back) may return but Costel Pantilimon (ankle) is out.

Verdict
Crystal Palace desperately need to find a win from somewhere to kick-start their survival bid and may get their wish on the south coast.

The return of Wilfried Zaha will boost Palace’s attacking threat and it is worth remembering that only four sides have scored more away goals than the Eagles.

Bournemouth have not looked secure at the back since Nathan Ake was recalled by Chelsea and their dodgy defence could cost them dear.

Team news
Bournemouth Simon Francis returns from a three-game ban and Max Gradel is back from the Africa Cup of Nations.

Verdict
Few visiting sides have found a way to win at Turf Moor and Leicester are unlikely to take anything from their trip to Lancashire.

The Foxes haven’t won on their league travels all season and were hammered 3-0 at Southampton nine days ago.

Just five points separate Leicester from the drop zone and a well-drilled Burnley side hunting a ninth home league win of the campaign could increase the Foxes’ relegation fears.

Team news
Burnley Scott Arfield and Johan Gudmunsson are in contention after returning from injuries to feature in the 2-0 win over Bristol City on Saturday. Dean Marney (knee) is out.

Leicester Islam Slimani (groin) is a doubt but fellow striker Leonardo Ulloa is a definite absentee.

Verdict
Middlesbrough have not scored enough goals to get themselves away from the drop zone and their lack of firepower could cost them again. Boro are the Premier League’s lowest scorers and could only muster a 1-0 win at home to Accrington in the FA Cup fourth round.

They are likely to find it harder to break down a resolute West Brom side who will look to pacy forwards Nacer Chadli and Matt Phillips to catch the hosts on the break.

Team news
Middlesbrough Daniel Ayala is available after suspension but Gaston Ramirez is not quite ready to return from injury. Defenders George Friend and Callum Chambers are also on the absentee list.

West Brom Jonny Evans (calf) and Brendon Galloway are injured are will not feature.

Verdict
Jermain Defoe is the only player to have scored for Sunderland this year and should pose an obvious threat to his former club, Tottenham.

Weakened by the ongoing absence of Jan Vertonghen, Spurs may struggle to keep Defoe off the scoresheet but they are still likely to win. England duo Harry Kane and Dele Alli are in terrific form and ought to enjoy themselves against the Black Cats.

Tottenham Harry Kane, Toby Alderweireld and Danny Rose have recovered from minor knocks and should start. Kieran Trippier and Jan Vertonghen are injured.

Verdict
Swansea have won two Premier League games out of three since appointing Paul Clement as manager and are a value bet to continue their revival against Southampton.

The rest of the league season could be difficult for the Saints, who have an EFL Cup final to look forward to.

Claude Puel has a lengthy injury list to deal with and looks particularly short at the back with Virgil van Dijk still out. The Swans are going the right way and can edge a tight clash.

Rodriguez and Jame Ward-Prowse are doubts after missing out at the weekend with minor injuries.