Home hope can run away with the trophy 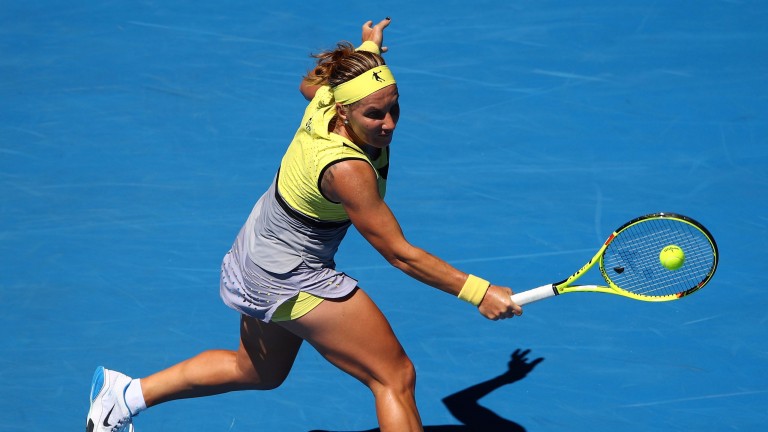 Simona Halep looks a vulnerable top seed in the St Petersburg Trophy, in which Roberta Vinci took the title last year when defeating Belinda Bencic in the final of an excellent tournament.

Halep won only four games against her Australian Open first-round opponent Shelby Rogers and the Romanian is going to have to up her effort or else further upsets are likely to follow.

She is no certainty to defeat Ana Konjuh or Monica Niculescu in her last-16 opener in Russia’s second city, and that could aid the causes of Melbourne Park finalist Venus Williams (if she plays) and a Vinci repeat bid.

It could also boost the aspirations of young guns Daria Kasatkina and Belinda Bencic, who meet in a potential first-round thriller, as well as Konjuh and useful wild-card Natalia Vikhlyantseva.

The problem for the young troupe, though, could be Venus. However, with no news having yet arrived that she will miss the trip to Russia, punters should assume she will be involved.

All those ifs can make life difficult for outright bettors, but luckily for anyone wanting an interest the bottom half of the draw looks more stable.

Second seed Dominika Cibulkova, winner of the season-ending WTA Championship in October, could be a danger, but the Slovakian world number six has yet to settle into her new-found stardom this year.

It’s difficult to have confidence in fellow seeds Kiki Bertens (may win a match or two) and Elena Vesnina and that could afford Svetlana Kuznetsova the chance for a hometown triumph.

Kuznetsova, seeded third this week, could face stern tests from Daria Gavrilova, Ekaterina Makarova and Cibulkova, but if she’s focused, and she started the Australian Open in fine fettle before getting bogged down against Jelena Jankovic and Anastasia Pavlyuchenkova, it’s difficult to see anyone stopping her.

Venus Williams could provide Kuznetsova’s toughest obstacle, but if that’s the case then clearly the chance is worth taking.

WTA Taiwan Open
Top seed Elina Svitolina is likely to be all the rage for the Taiwan Open and the improving, consistent Ukrainian could prove difficult to beat if in the mood.

But while Svitolina will probably win her first couple of rounds – unlike St Petersburg there are no byes for the top seeds in Taipei City – the market leader could be seriously tested if running into on-the-up Shelby Rogers in the last eight and Caroline Garcia or Jelena Jankovic in the semi-finals.

Garcia ended 2016 with confidence-boosting victories over Karolina Pliskova and Petra Kvitova in the Fed Cup final, while the Williams’ sisters Australian Open final could serve to inspire former world number one Jankovic. The bottom half of the draw may provide the best value bet, though.

Sam Stosur’s wildcard request has been granted, but while the seasoned second seed is seldom one to ignore, she seems much more of a force in the open air than indoors.

Stosur could still win a round or three, though, and could make life difficult for a solid performer such as Shuai Peng, who is playing with conviction and could come through a good-quality eighth of the draw featuring recent Shenzhen champion Katerina Siniakova.

The one they may all have to beat, however, is Sorana Cirstea. The Romanian defeated Carla Suarez Navarro and Alison Riske in Melbourne before running into French Open heroine Garbine Muguruza and a reproduction of that form could put her in with a title shout.

She is capable of winning her first two rounds against Japanese opponents, and could then face fourth seed Anastasija Sevastova, who should have little trouble in her opening two assignments.

Cirstea, who is in her prime aged 26, could be good enough to end the hopes of Stosur or Peng and would also be capable of causing problems were she to line up against Svitolina, Garcia or Jankovic in the final.