Holm could be in for third straight defeat

De Randamie can be queen of New York 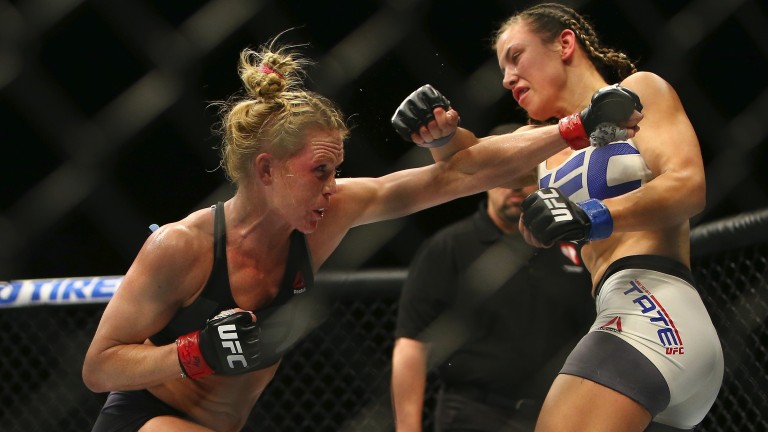 The Ultimate Fighting Championship returns to New York with a curious choice of main event at the Barclays Center with Holly Holm taking on Germaine de Randamie for the chance to be the first women's 145lb UFC champion.

Holm shot to fame in 2015 when she became the first person to defeat superstar Ronda Rousey, knocking the former bantamweight champion out in an incredible upset.

But she has struggled since, first losing the title to Miesha Tate with a dramatic fifth-round choke then dropping a decision to Valentina Shevchenko.

Holm will be desperate to avoid a third straight defeat, but beating Dutch opponent De Randamie will not be easy. De Randamie is a well-rounded fighter whose only loss in her last five was to current bantamweight champ Amanda Nunes.

Despite Holm getting top-notch martial arts training at Greg Jackson's gym in Albuquerque the former boxer still relies too much on her striking and De Randamie's greater skill set could see her take the title.

The headline event may be a strange choice but the rest of the main card is rock solid.

Former men's pound-for-pound number one Anderson Silva takes on Derek Brunson and it's worth backing the legend to get a much needed victory.

The Spider hasn't won in the octagon for five years, but Brunson is a step down in class to all the fighters who have got the better of Silva, and the Brazilian can use his superb counter punching to win the fight.

Jacare Souza, another Brazilian middleweight, should also see his hand raised. Souza fights big-hitting American Tim Boetsche and his ground skills should take him to a tenth victory from his last 11 contests.

Glover Teixeira can make it a Brazilian hat-trick by knocking out Jarad Cannonier at light-heavyweight. This one should be a real slug-fest while it lasts, but Teixeira has more ability and experience.

Dustin Poirier is likely to get the better of Jim MIller at lightweight but is no value in the betting.