The lowdown on the US Open 2018 track 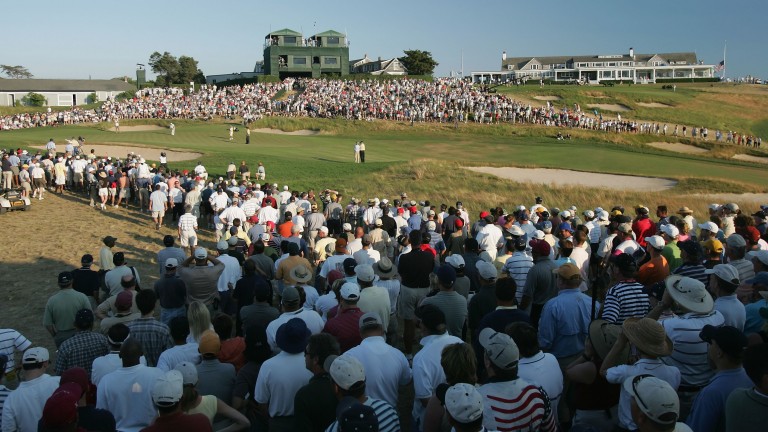 1 399 yards, par 4
Shinnecock Hills opens with the second-shortest par four on the course which offers a birdie chance. It features a fairway that narrows significantly as it approaches two fairway bunkers on the right. Players start from an elevated tee close to the clubhouse and, should the wind suit, they may try to hit a driver close to the putting surface.

2 252 yards, par 3
A prevailing southwest breeze is a much-needed aid on this challenging par three that has been lengthened by 26 yards since the 2004 US Open. The longest of the par threes, the hole’s green is protected by six bunkers and is open in front but there is a small upslope short of the putting surface. Par is a good score.

3 500 yards, par 4
Adding 22 yards to the hole, the new tee at the third is further back and to the left, and the tightened fairway makes the angle of the dogleg more distinct. Six fairway bunkers come into the picture but a bunker on the drive zone’s right side is unlikely to come into play, unless affected by wind.

4 475 yards, par 4
Having been lengthened by 40 yards, the fourth has also seen its left side brought in, meaning the fairway measures 32.5 yards at the 300-yard mark, bringing the fairway bunkers into play. The slightly elevated green features subtle breaks all over it and reaching it could prove tough with three deep bunkers creating a narrow area to target. Making par on this left-to-right dogleg is no easy feat.

5 589 yards, par 5
The course’s first par five offers players a strong birdie and perhaps even eagle opportunity. The hole has been lengthened by 52 yards but the green can be reached in two with the right breeze, while the carry distance to the left-hand fairway from the tee is approximately 250 yards. Players could be deceived by a green that appears large but, due to its undulations that can move the ball away from the hole, is a far smaller target.

6 491 yards, par 4
This picturesque dogleg-right features a blind tee shot but it is only a 240-yard carry across the bunker on the right side of the hole. Anyone opting to go left after hitting into a blind fairway will encounter a longer approach shot from a less desirable angle. Most of the field should evade it with their second shots, but the hole also includes the course’s only water feature.

7 189 yards, par 3
Players must tee off into prevailing winds on this representation of the Redan hole at North Berwick in Scotland, which demands meticulous distance control when trying to make a green that slopes from front right to back left. Keeping out of a back-left bunker renowned for gobbling up tee shots will be crucial, with those missing the green needing to overcome the slope with their recovery shot.

8 439 yards, par 4
A hole lined by 12 bunkers has a generous fairway and those who can hold off the danger of the bunkers on the left will have a good angle for the approach shot to the green. Should players reach the green with relative ease, they must then contend with a severely undulating putting surface which has drop-offs at the back, front and left-hand side. It has been lengthened by 41 yards but solid shots could create a birdie chance.

9 485 yards, par 4
The concluding hole of the front-nine requires a challenging drive into a narrow fairway with a lot of movement. Should players fail to make the bottom of the hill with their tee shot, they could have an uneven lie heading into an uphill approach shot, obscuring sight of the flagstick and demanding good distance control.

10 415 yards, par 4
Among the course’s shortest par fours, the start of the back nine incorporates a hill in the middle of the fairway that can carry drives further. Players face the dilemma of playing a 220-yard shot to a plateau and relatively level lie or a drive over the hill. This is followed by a downwind approach to the green.

11 159 yards, par 3
The field should be cautious of the shortest hole on the course that features an incredibly small green that has bunkers to the front right and front left of it, and begins with an uphill tee shot. Many would be content with par.

12 469 yards, par 4
A fairway that measures just 30 yards wide throughout the drive zone makes the tee shot at one of the course’s easier holes vital when targeting a highly possible birdie. The absence of green-side bunkers reduces the difficulty of the approach shot but ridges on the green can cause problems.

13 374 yards, par 4
With the fairway a meagre 16.5 yards wide at 300 yards alongside a large bunker, getting the tee shot right is crucial to a player’s chances of scoring a birdie on the course’s shortest par four. Approach shots can be trapped by the bunker at the front right of the green and some could just settle for par.

14 519 yards, par 4
A significant lengthening by 77 yards has returned the 14th to its former par-four status. Bunkers on either side of the fairway can be found in the landing area targeted by most players and aiming for the left is suitable in order to set up an easier approach shot. The green slopes from back to front and is fronted by two bunkers.

15 409 yards, par 4
The raised tee creates a significant change in elevation to the fairway and most will favour a drive over the ridge across the fairway and opt for short-iron approaches. The putting surface sits alongside several bunkers but players making the fairway have the chance of birdies.

16 616 yards, par 5
The longest hole on the course, having been lengthened by 74 yards. Players will play into the prevailing wind. Anyone looking to make the green in two shots will need to navigate a meandering fairway flanked by bunkers before encountering a well-protected, narrow green.

17 175 yards, par 3
Prevailing winds from left to right coupled with the angle of the green demands precision from players, as many target the left-sided bunkers with the hope that the wind drifts the ball back towards the green. Those who play a shot slightly to the right could see their ball taken by the bunker.

18 485 yards, par 4
The final hole starts with a new tee that creates a partially blind tee shot. Players will look for the fairway’s right side to set up a decent approach shot to a green that pitches from back to front. Par is an admirable score.