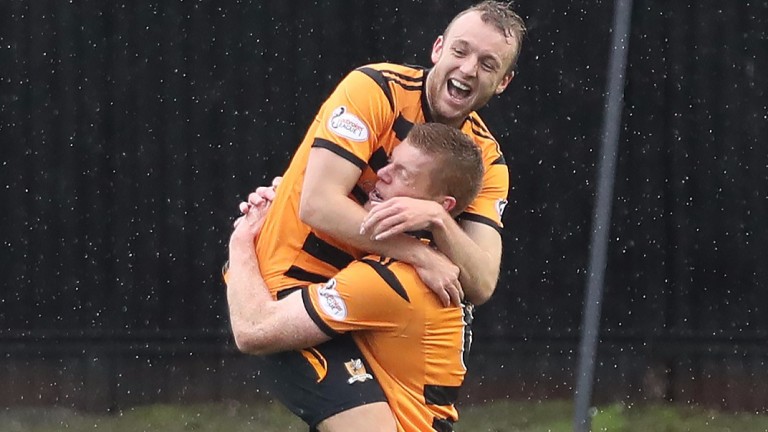 Arbroath are on a terrific run and can dispose of Berwick Rangers when the teams clash in Ladbrokes League Two.

Dick Campbell’s charges are motoring with four wins and one draw from their last five games and just one defeat in 14 league games. The Angus side have plenty of attacking options and should have too much firepower for the English team.

Berwick’s win at Cowdenbeath last week was only their second in the league since September and odds-on Arbroath look good things at Gayfield as they chase leaders Forfar Athletic.

Alloa started the season like a train before they were derailed by the loss of manager Jack Ross to St Mirren but player-manager Jim Goodwin is learning quickly and they can make it three wins in a row by beating Peterhead.

The Wasps knocked cup-holders Ross County and Caley Thistle out of the Betfred Cup at the start of the campaign, but struggled after that.

They’ve bounced back recently with wins at Stenhousemuir and Stranraer and will fancy their chances against a side they have already beaten twice this season.

Jim McInally’s team have struggled defensively this term and Alloa’s forwards could exploit the Blue Toon’s back line.

If Fife’s Central Park can beat the freeze, Edinburgh City look decent value for their trip to League Two bottom side Cowdenbeath.

City’s loss last week to in-form Arbroath was their first in the league since October and manager Gary Jardine has moulded a side who have quickly adapted to football at this level after a turbulent start.

The capture of former Middlesbrough midfielder Josh Walker this week – he once scored against Bayern Munich while on loan at Aberdeen – gave an indication of the capital club’s ambitions.

They look a big price at the home of the Blue Brazil, who are trying to avoid a third consecutive relegation. Four losses from their last five games tells its own story and City can capitalise.