Heung-Min Son could break the deadlock at Leicester

Korean is a superstar for Spurs 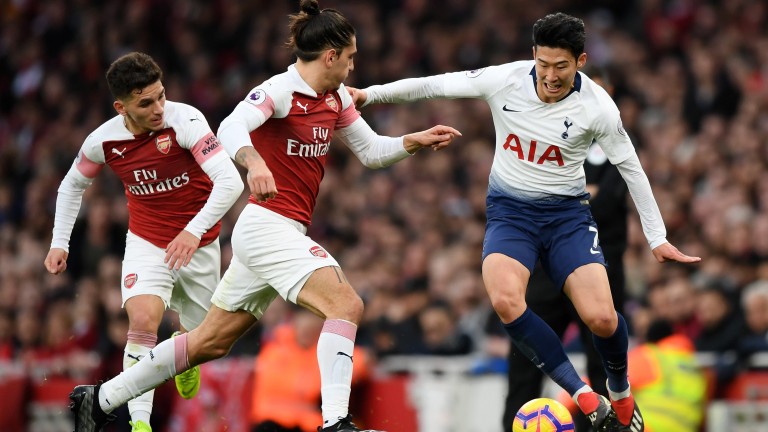 The sight of his team in third spot in the Premier League will have given Tottenham manager Mauricio Pochettino a lift after their 3-1 win over Southampton.

But the turbulent cocktail of a busy treatment room and a continuing hectic schedule will probably be playing on the Argentinian's mind as Spurs head to Leicester for their Saturday night TV showdown.

A crunch Champions League clash in Barcelona awaits on Tuesday, but any team changes for the trip to the King Power are likely to be enforced rather than an attempt to rest weary legs before the trip to Camp Nou.

Still, they are soldiering on and although the win over the Saints was preceded by them being put in their place by arch-rivals Arsenal, they should be confident of getting something at a stadium where they have found the net in each of their eight league and cup visits.

Leicester head into the fixture having avoided defeat in their last six games and they should be content with being a point behind sixth-placed Everton at this stage in the season.

Like his opposite number, manager Claude Puel has injury concerns to key players and he will be desperate to see Jamie Vardy available as Kelechi Iheanacho still doesn't totally convince, although James Maddison has looked excellent in patches after his arrival from Norwich.

It is difficult to suggest they have a strong chance of securing Europa League football for next season when they have failed to see off Burnley, Brighton and Fulham in recent outings and this step up in class could prove beyond them.

Quotes of evens about a Tottenham win will probably have plenty of takers, especially as the creative and dangerous elements of Pochettino's attack should be available.

While Harry Kane has scored in each of his last three Premier League games, Heung-Min Son has been playing some of his best football since his signing from Bayer Leverkusen three years ago.

The South Korean looks a decent each-way shout for the first goal at the ground where he netted twice in Spurs' 6-1 win in May 2017 and again in the 2-0 FA Cup success the previous season.

Tottenham
Jan Vertonghen is set to return after serving a one-match ban, but Kieran Trippier and Juan Foyth have been ruled out, along with Victor Wanyama, Mousa Dembele, Erik Lamela and Davinson Sanchez.

Key stat
Tottenham have failed to score in just one of their last 22 Premier League away matches.