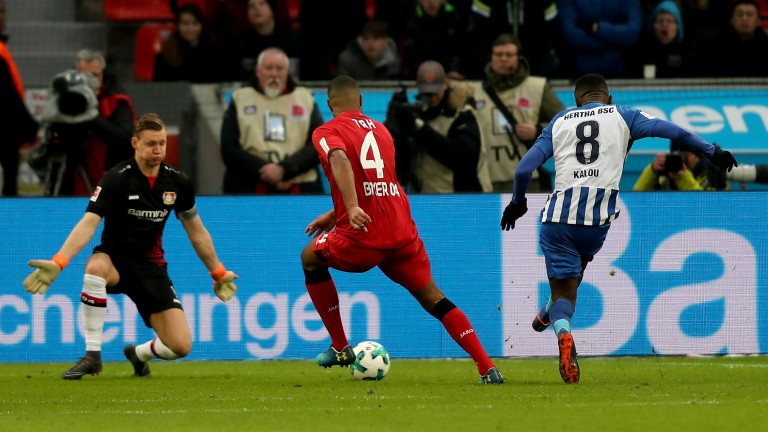 Salomon Kalou scores for Hertha Berlin in their win at Bayer Leverkusen
Getty Images
1 of 1
By Dan Childs 8:00PM, FEB 15 2018

The battle for Champions League qualification places in the Bundesliga is wide open and may still feature mid-table Hertha Berlin, who look value odds-against favourites to post a home win over relegation-threatened Mainz.

Leaders Bayern Munich are in a class of their own, 18 points clear of the field.

But a mad scramble is on the cards for the top four positions because just eight points separate second-placed Leipzig from Hertha in 11th.

It has been a mixed start to the year for Hertha, who have won one, drawn three and lost one of five league games. But they put in a strong performance to claim a surprise 2-0 victory away to Leverkusen last Saturday.

Salomon Kalou was on target at the BayArena, netting his sixth goal in his last eight appearances, and he could be a key player in getting Hertha closer to the top four.

A victory over against Mainz is a must if they are going to apply pressure on the teams above them but they have little to fear from the visitors, who are on a four-match losing run.

Third-bottom Mainz have the joint-worst defence in the division, shipping 41 league goals, and have not won an away league game all season.

They have conceded at least two goals in each of their last ten league fixtures and their defensive struggles may see them drop out of the top flight for the first time since 2009.

Mainz were 1-0 winners at home to Hertha in September but their results and performances have deteriorated since the winter break and their struggles are set to continue.