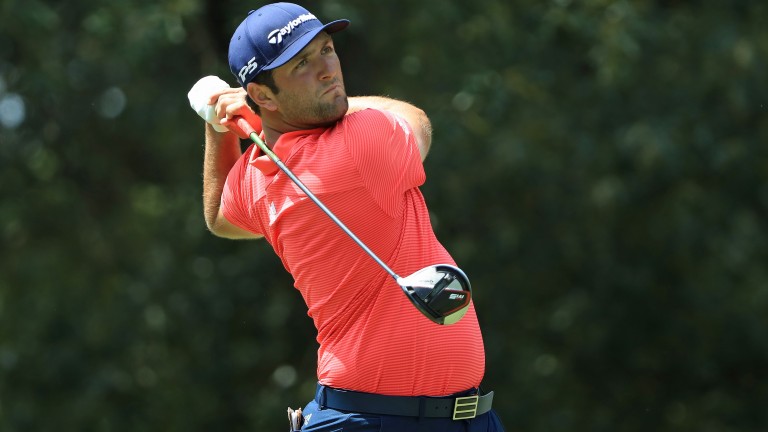 A thrilling six-man Saturday shootout looks in store at the Albany, The Bahamas, with a sextet of the best players in the world battling for the Hero World Challenge title.

Gary Woodland, available at 20-1 ante-post, birdied the 17th and 18th holes of round three to edge ahead at 13 under par. The leader is 11-4 with 18 holes to play in a tournament which started on Wednesday.

Henrik Stenson is alone is second place, with Tiger Woods, Justin Thomas and Jon Rahm tied for third spot, a further shot off the pace. Halfway pacesetter Patrick Reed carded a third-round 74, including a two-shot penalty for improving his lie on the 11th hole, to drop to sixth and there is a four-shot gap to the rest of the field.

The action resumes at 2.37pm UK and Ireland time, with the final pairing of Woodland and Stenson teeing off at 4.05pm.

Aside from a brief spell when Patrick Reed went clear, it has been tight at the top of the Hero World Challenge leaderboard throughout, and it is going to take a magnificent final-round performance from one of the contenders if they are to dominate at Albany. An entertaining denouement seems almost guaranteed.

Gary Woodland has traditionally never been the most trustworthy frontrunner, but becoming a Major champion at the US Open in June has added an extra level of self-belief. Woodland must be respected, but makes no appeal at 11-4 with so many class acts just over his shoulder.

Henrik Stenson has not won anything since August, 2017 – a low-key Wyndham Championship – and has been in a slump by his standards this year. A tie for 44th place in the DP World Tour Championship last time out – and event he has twice won before – gave no clue that he would be a factor in The Bahamas.

The most interesting runners at this stage are the world-class trio tied for third place. Tiger Woods has had a lot on his mind, hosting the Hero and then captaining the American Presidents Cup team in Australia next week, and him getting into contention just further illustrates the great man's mental strength.

Even a distracted Woods is dangerous, but outright punters are advised to concentrate on the two players alongside him on the leaderboard – Jon Rahm and Justin Thomas.

Rahm is only fractionally shorter in the betting to when advised as a hearty each-way investment at 4-1 on tournament-eve and his backers are in a strong position. The Spaniard made what could turn out to be a crucial birdie at the difficult 18th hole to close round three, moving two shots off the lead with just his final round of the year to go.

Rahm can give this round everything he has got – all that is left for him this year is his wedding and Christmas – so expect a fierce and determined Saturday effort from the Race to Dubai champion. He has ended both 2017 and 2018 by winning his final tournament of the year, and the massively in-form superstar will be fancying his chances of ending 2019 in the best possible fashion.

Thomas may emerge as the biggest hurdle for Rahm to overcome. The previous Albany course form of Thomas did not make much sense – he had finished well down the field in two visits, despite the track, with its generous fairways and five par-fives, playing hugely to his strengths. Thomas is arguably the best in the world at approaching par-fives with a wood in hand.

Having November off seemed to take the edge off Thomas in previous years, but this time, with a Presidents Cup looming, he appears to have kept himself sharper.

A ding-dong battle between two candidates for the world-number-one spot could be in the offing. With Brooks Koepka and Dustin Johnson labouring with injury issues, Rahm, Rory McIlroy and Thomas could end up jostling for top-dog status next year.

Sky Bet have got a dual-forecast market in operation (who will finish first and second in either order?) and the 9-1 about Rahm and Thomas is most attractive. Rahm at 7-2 is the best option for punters looking for a pure outright wager.