Heavy-scoring Green can give Barney trouble

Dutch ace is no certainty 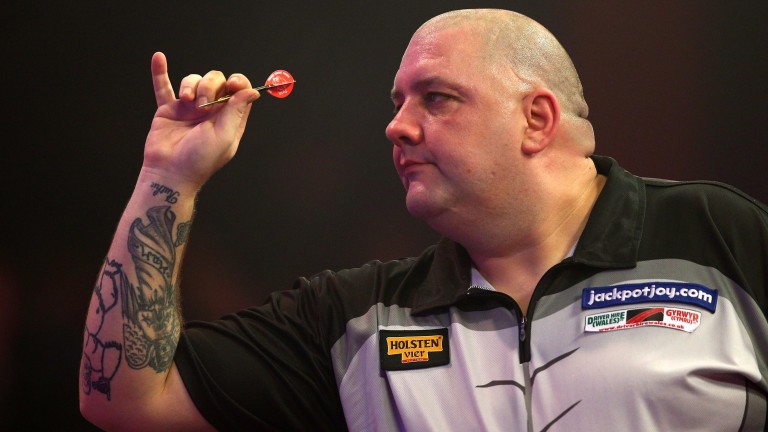 Van Barneveld v Green
Head-to-heads: 1-1
Almost ten years since Raymond van Barneveld’s epic world title fight with Phil Taylor the giant Dutchman is back on the big stage – and another titanic contest is on the cards.

It may not be over the 13 sets that the 2007 William Hill World Championship final was decided, but the five-time champion can expect to be detained for a while by Robbie Green in round one.

The bookies are firmly behind the orange legend but Green will happily assume the role of underdog.

Kong came over from the BDO two years ago with high hopes but he’s yet to land any big punches. Maybe last month’s run to the quarter-finals of the Players Championship Finals is the spirit lifter the big fella needs.

A Barney battering is unlikely as Green scores heavily enough to hold his own throw consistently. With that in mind, a tussle going to 17 legs or beyond is taken.

Koltsov v Horvat
No previous meetings
Dragutin Horvat has tried several times to qualify for Alexandra Palace and having finally got here he can celebrate with a preliminary-round success over Russia’s Boris Koltsov.

The Croat is a 4-7 shot and deserves to be given current form. He emerged from a traditionally tough qualifying school having a few weeks earlier thumped Ricky Evans, Gerwyn Price and Ian White on his way to the last eight of the International Open.

He is a big scorer and should have too much for firepower for Koltsov, whose previous visit to the finals ended in a 3-1 loss to Kevin Painter.

The winner plays former finalist Simon Whitlock at the end of the night.

Dolan v Kist
Dolan leads 3-1
This is the ultimate toss-of-a-coin showdown between two players desperate to rediscover past glories.

Brendan Dolan, the History Maker, has had a fairly forgettable 2016. He leaned heavily on Daryl Gurney for a semi-final spot at the World Cup and reached the quarters of the Grand Slam, though his route to the last eight was hardly the toughest.

The Fermanagh man has never gone beyond round two in eight attempts, while Kist has looked a lost soul since winning the Lakeside world title in 2012. Injuries have been his curse.

As the odds imply, this could go either way and could also run and run, hence there is no hesitation in backing Dolan to smack in at least a trio of 180s.