Hawaiian Holloway to have his day in the sun 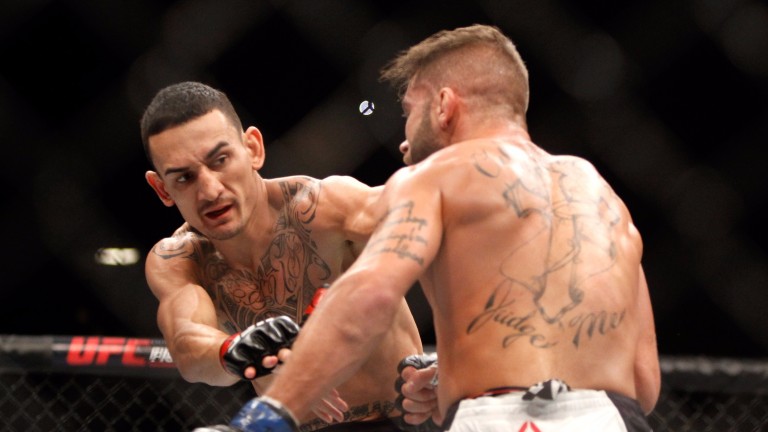 Holloway v Pettis
BT Sport 3, 3am Sunday
Prelims from 1am

The interim featherweight title bout between Max Holloway and Anthony Pettis headlines UFC 206 from the Air Canada Centre in Toronto and Hawaiian kickboxer Holloway should have the advantage.

Both men are stand-up fighters so don't expect many takedown attempts, and while Pettis is a dangerous fighter, especially with his kicks, Holloway's superior boxing should see his hand raised, but not before a brutal back-and-forth war.

Holloway will be full of confidence after nine consecutive UFC victories. He last tasted defeat in the Octagon when losing a decision to Conor McGregor in 2013 and has not looked back since.

Pettis missed weight at Friday's weigh-in, so only Holloway can win the title and Pettis must forfeit 20 per cent of his purse to Holloway, which is far from ideal preparation.

Pettis is a former UFC lightweight champion but is under pressure to get the win after losing three fights in a row at lightweight. He moved down divisions and won on his featherweight debut last time out but tends to struggle against accurate strikers, which should suit Holloway.

This could easily go to the judges after five action-packed rounds. Holloway has won his last two on the scorecards, Pettis has lost three of his last four by decision, and Holloway looks a good bet to have his hand raised.

At welterweight, Donald Cerrone should have too much for Matt Brown but this is another one that may go the distance, albeit over three rounds.

Cerrone has been on a tear-up since moving up to the 170lb division, winning all three of his fights inside the distance (two TKOs and one submission) but he may have to be patient against Brown, who is not known as Immortal for nothing.

Brown is very hard to hit and has excellent ground skills, and he can survive to the final bell.

Korean Superboy Dooho Choi is a strong favourite to beat veteran featherweight Cub Swanson, but the layers may have gone too far.

Swanson is ranked number four in the division and is Choi's biggest test so far in the UFC, and although he has won all three of his UFC contests by first-round knockout his ground skills are unproven.

Swanson is an excellent grappler and could expose a weakness, and at the prices is worth siding with.

Tim Kennedy faces a tough return to the Octagon after more than two years out against hugely-talented youngster Kelvin Gastelum.

Kennedy has wins over some of the biggest names in the middleweight division, including champion Michael Bisping, but may be rusty after his hiatus and Gastelum, a marginal underdog, is more than capable of taking advantage.

Gastelum was due to fight Cerrone at UFC 205 last month but failed to make the lightweight 155lb limit, so he should be fit and raring to go at 170lbs.