England are 4-5 to win Friday's finale at Old Trafford 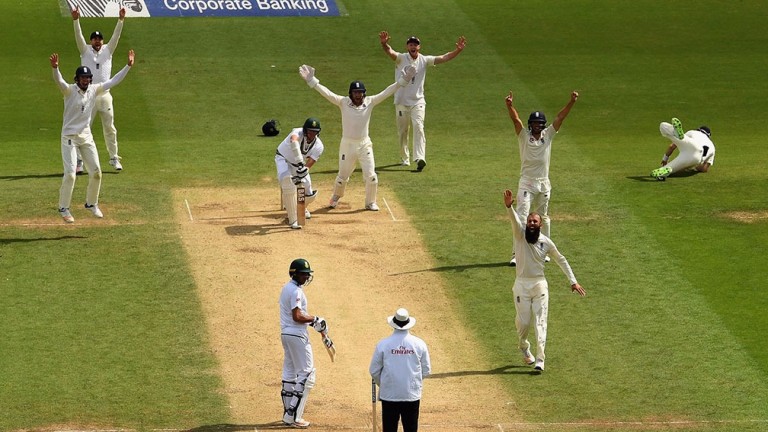 Moeen Ali's hat-trick wrapped up a 239-run victory for England against South Africa and the home side are 4-5 to complete a 3-1 series win at Old Trafford, venue for Friday’s fourth Test.

England’s fast bowlers set up the win, dismissing the Proteas for 175 in the first innings and reducing them to 52-4 after tea on Sunday.

The hosts began the final day as 1-14 favourites and, despite the sterling efforts of Dean Elgar (136), they sealed victory during the afternoon session as spinner Moeen struck with his last three deliveries of the match.

Debutant Toby Roland-Jones ended up with eight wickets in the Test but Ben Stokes was named man of the match for his brilliant 112 in the first innings.

South Africa have shown their bouncebackability in this series already, winning the second game at Trent Bridge after a crushing defeat at Lord’s.

However, another moderate batting display – Faf du Plessis and Vernon Philander both shouldered arms and were dismissed for golden ducks – leaves them 11-4 to win the fourth Test and square the series 2-2.

The draw in Manchester is a 10-3 chance and England were in exactly the same position – 1-0 down and 2-1 up – against Pakistan last summer before losing the final Test and drawing the series 2-2.

Joe Root, 9-4 to be England’s top runscorer at the start of the series, retains a healthy lead over his teammates and Elgar’s ton took him past Hashim Amla with one game remaining.