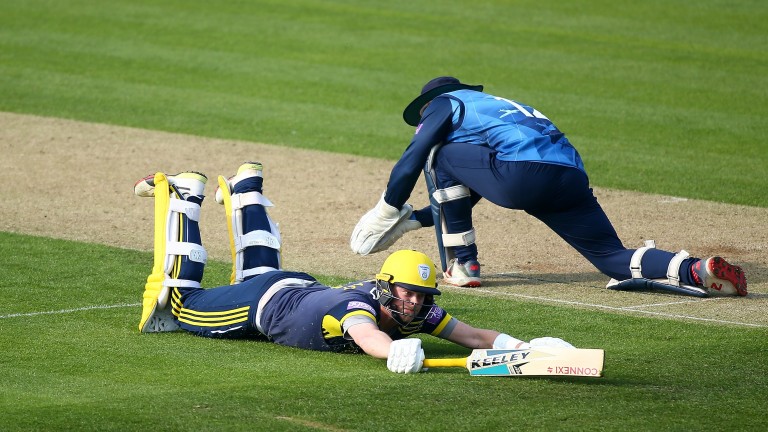 Hampshire's Sam Northeast puts in a dive during this season's One-Day Cup clash with Kent
Jordan Mansfield
1 of 1
By James Milton 8:00PM, MAY 24 2019

Hampshire opened up as 4-5 favourites to successfully defend their One-Day Cup crown against Somerset at Lord's but the match odds have flip-flopped following the news that James Vince and Liam Dawson are unavailable for the holders.

Skipper Vince scored 79 in the semi-final victory over Lancashire, taking his runs tally to 509 in seven innings this season, while spinning all-rounder Dawson has contributed 18 wickets and 274 runs in nine appearances.

The market reaction to their absences is understandable and Hampshire are also without batsman Aiden Markram, who scored 466 runs in eight South Group games before joining up with South Africa's World Cup squad.

But Hampshire signed off the group stage with a thumping seven-wicket win over Somerset at Taunton and they still have plenty of international experience in their ranks.

India batsman Ajinkya Rahane joins Rilee Roussow, who scored a century in last year's final, and fast bowlers Kyle Abbott and Fidel Edwards while leg-spinner Mason Crane has rediscovered the form that earned him an England call-up in 2017.

Sam Northeast is set to captain Hampshire in Vince's absence and he looks a tempting price to top-score for them.

Northeast made a sparkling 75 not out off 60 balls in last year's final against Kent, unperturbed by a hostile reception from fans of his former county, struck an unbeaten 51 against Somerset at Taunton, and made 133 in the second innings of this week's County Championship win over Nottinghamshire.

Somerset were impressive winners away to Notts in the semi-final as Azhar Ali continued his fine form in the competition with a knock of 72.

Overlooked by Pakistan in ODI cricket since January 2018, Azhar remains a class act at this level, scoring 406 runs in ten games and taking 5-34 in the win over Worcestershire.

FIRST PUBLISHED 8:00PM, MAY 24 2019
Hampshire signed off the group stage with a thumping win over Somerset and they still have plenty of international experience in their ranks