Hammers can add to gloom hanging over Old Trafford

Tight cup clash can be anticipated 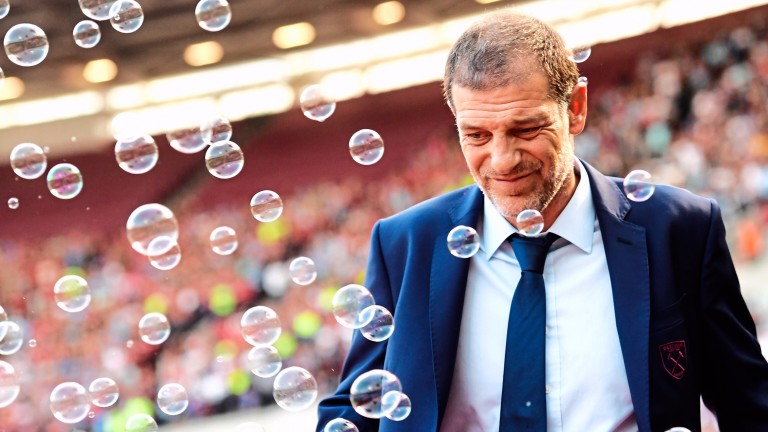 They dropped two points in a disappointing performance against the same ordinary opponents at the weekend – but West Ham can get it right in the rematch at Old Trafford tonight.

Yet the same team, under the same pressure and with all the same problems, get a 1-2 quote for this evening’s EFL Cup quarter-final tie against opponents who, presumably, are going to prove just as stubborn.

There isn’t a great deal to like about West Ham, a side who have lost six of their last nine away matches and are without a win in four. But the fact is United are the wrong price given what a mess they look.

The West Ham or draw double chance is 9-5 but there’s definitely a case to be made for the visitors to qualify at 7-2.

United bossed affairs at the weekend, just as they had in previous home draws against Stoke, Burnley and Arsenal. But there’s a trend appearing. They’re good enough to dominate but not good enough to win, and that’s a reason to be reluctant to punt them at skinny odds.

The Red Devils are likely to see more of the ball than their guests but they aren’t converting chances and while Adrian (if picked) will be busy, West Ham are going to be stronger defensively with Winston Reid back from a ban.

United, in contrast, come with no guarantees at the back. Luke Shaw, mocked and dropped by his manager, has been replaced by Matteo Darmian who looks clueless at left-back, so Mourinho will make changes once more and the Portuguese gaffer clearly still doesn’t know his best team.

United are unbeaten in nine and can turn it on occasionally and get rewarded. The 4-0 romp against Feyenoord last week was a case in point. But those efforts are too infrequent and there’s a growing sense that while Mourinho is losing the backing of several players, those above are losing patience in him.

This represents a great chance for West Ham to reach the semis on a ground they’ve drawn at on their last three visits.

Bilic’s men, who knocked out Chelsea in the previous round, have endured an awful start but looked better in a luckless loss at Spurs before battening down the hatches successfully enough at Old Trafford at the weekend.

The swagger of last season has gone; Dimitri Payet started the season slowly, Aaron Cresswell didn’t start the season at all, and those two were crucial factors in last season’s heroics.

It’s hard to envisage many goals as United are struggling to find the net while West Ham are desperate to stay tight, disciplined and get the crowd jittery.

An anytime scorer bet to chew over is Ashley Fletcher at 4-1 since the former United youngster may well get the nod as Diafra Sakho and Andy Carroll look set to miss out.

West Ham
Diafra Sakho (hamstring) is out and Andy Carroll still not ready. Winston Reid should return from a ban.