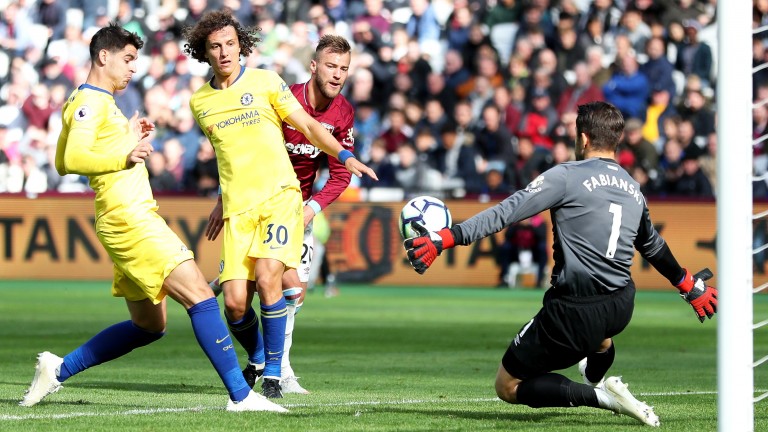 Chelsea stayed third in the Premier League and were shunted out to 14-1 in the title betting after struggling to make an impact in a 0-0 draw against West Ham at the London Stadium.

The result brought an end to Chelsea's 100 per cent record and their lacklustre performance demonstrated why they are so far behind Manchester City and Liverpool in the eyes of the layers.

A two-horse race looks increasingly likely with City shortening from 4-5 to 8-11 and Liverpool shifting from 2-1 to 15-8.

Chelsea get the chance to change that perception this week with back-to-back matches against Liverpool. Maurizio Sarri's side travel to Anfield in the EFL Cup on Wednesday and host the leaders in a Premier League clash at Stamford Bridge on Saturday.

West Ham continue to improve and have been shifted from 4-1 to 11-2 in the relegation market.

Arsenal climbed to sixth after second-half goals from Alexandre Lacazette and Pierre-Emerick Aubameyang clinched a 2-0 victory at home to Everton.

Everton remain 12th after extending their winless sequence to four league games and have eased from 9-2 to 15-2 to finish in the top six.

Celtic remain six points behind leaders Hearts in the Ladbrokes Scottish Premiership after sliding to a surprise 2-1 defeat at Kilmarnock.

An injury-time strike from Stuart Findlay sealed the points for Killie and left Celtic sixth with ten points from six games.

It is the Bhoys' lowest points take from the first six games since the 1998-99 campaign when they accrued nine points from a possible 18 under Jozef Venglos.

However, a recovery is expected with Celtic red-hot 3-10 favourites to win the title. Rangers, who thumped St Johnstone 5-1, can be backed at 3-1.