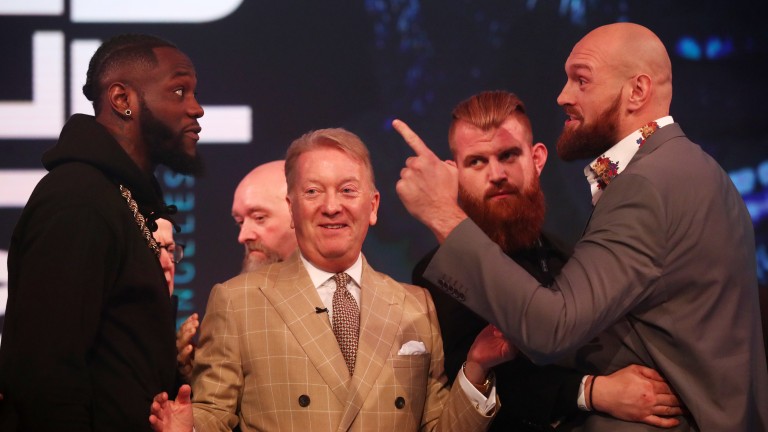 It's been called the biggest heavyweight clash on US soil since Lennox Lewis beat Vitali Klitschko in 2003, and Deontay Wilder's WBC title defence against Tyson Fury is certainly a battle of the giants.

At 6ft 7in Wilder is used to towering over his opponents but he will be looking up at the 6ft 9in Gypsy King, who is in his first meaningful fight since dethroning long-term champion Wladimir Klitschko three years ago.

Wilder is a marginal favourite in Los Angeles, but money has been coming in for Fury during fight week for a contest that has everything.

Both men are undefeated, colourful characters with fabulous back stories - Wilder has the extraordinary knockout record (39 KOs from 40 wins), while Fury has unfinished business and a destiny to fulfil after losing his titles outside the ring and battling back from his well-documented struggles with depression.

With so many intangibles this isn't an easy fight to pick, and a quick search on Google or YouTube will reveal a plethora of pundits and former pros who are almost split down the middle on the outcome, but let's break down the two fighters and separate some of the myths from reality.

The fall and rise of Tyson Fury

Beating Wladimir Klitschko for the world titles in Germany in 2015 was a truly outstanding achievement and should have set Fury up for a long stint at the top, but it proved the catalyst for a downward spiral which almost cost him his life.

Fury not only beat the most dominant heavyweight of the modern era in his own backyard, he absolutely schooled a bamboozled Dr Steelhammer, who barely laid a glove on him.

But instead of being hailed a hero upon his return, he faced a backlash from UK media outlets who preferred to focus on negativity and a campaign to have him banned from the BBC sports personality awards for controversial comments.

A rematch with Klitschko was set, but Fury was forced to pull out after injuring his ankle and the subsequent layoff left him vulnerable to his own mind, and his life descended into alcohol abuse.

A ban for a performance-enhancing substance (which was never proved and eventually dismissed) complicated matters further and, out of shape and out of his mind, he was forced to relinquish the belts he had spent his whole life chasing without even putting up a fight.

He ballooned up to more than 28 stones and was suicidal. There seemed no way back for the fallen champ, but a true champion gets back up when he is down and Fury's biggest fight was about to begin.

Motivated, he says, by a video Wilder posted on social media saying Fury was washed up, he decided to ditch the family-based training team and go for a fresh approach led by young coach Ben Davison, who had been working as an assistant to his close friend Billy Joe Saunders.

With his legal problems finally resolved, Fury has been able to concentrate on getting back into shape, and with a heavy focus on science and nutrition his team look to have done a fantastic job.

Only time will tell how his body will hold up after three years in the wilderness, but he looks fitter and stronger than ever before and his mind seems sharp and focused. Two tune-up fights earlier in the year blew off a few cobwebs, and while the performances were far from world class he has always risen to any challenge that stands in front of him.

Fury has based his camp in the US for the last two months, and that may have provided a somewhat unexpected boost to morale. Open and honest about his struggle with mental illness and putting himself up as a poster boy for the downtrodden, he has seen his story has lapped up by the US sports media and is finally being shown the respect he was denied in his own country.

Having Ricky Hatton and Freddie Roach alongside head-trainer Davison in his corner could be seen as a publicity stunt but Hatton has been friends with Fury for years, trains his younger Brother Tommy and brings a wealth of big-fight experience

Roach, officially the cut man, is one of the most respected coaches on the planet and owner of the Wild Card gym in LA where Fury finished off his camp. Both have said any advice will be given through Davison, who remains in charge.

Inactivity may be a major factor once the bell goes, but the signs are that he is happy, confident and well prepared for the task ahead.

Take a walk on the wild side

Wilder by name, wild by nature is the accepted narrative surrounding the WBC champion, with the 39 KOs on his highlight reel characterised by wild windmilling punches and big right hands that seem to start from the back of the auditorium. But that may be doing him a disservice.

The Bronze Bomber takes his moniker from the medal he won at the 2008 Olympics, and he brings more to the party than power alone.

He didn't lace up a pair of gloves until 2005 but just two years later he upset the odds to win the Golden Gloves and US Amateur Championships, earning him a place on the Olympic squad.

Switching to the pro ranks, he compiled an incredible run of knockouts, but his career really got going after he won the WBC title from Bermane Stiverne in 2015, and he has successfully defended the belt eight times since.

That title fight with Stiverne was the only time in his entire career that he has needed the scorecards, but the level of opposition he has faced has often not been up to much, and his wild style can leave him open.

Perhaps his best performance came in his last fight against Luis Ortiz, but it also highlighted some of failings. In a close fight, Wilder looked to have found the magic punch in the fifth round, flooring Ortiz, but the rugged Cuban got back up and came within a whisker of stopping Wilder in the seventh.

Wilder showed tremendous heart and proved he carries his power into the latter stages with a late stoppage, but there are plenty of flaws in his game if Fury has the skill and timing to exploit them.

Common predictions in the build-up have usually gone along the lines of either Wilder by KO or Fury on points with the theory going that Wilder carries the most power and Fury has the superior skills, but that may be too simplistic.

An Olympic medal is proof that Wilder is a good boxer, and if Fury lets his hands go he can put anyone to sleep. If inactivity does prove a problem for Fury, Wilder - who is unquestionably a great athlete - could take the later rounds or get a stoppage if Tyson's gas tank empties.

But despite his incredible KO record, Wilder may struggle to stop Fury. Not only is he facing an opponent who is considerably bigger than him, he must deal with one of the most awkward styles and the best footwork in the heavyweight division.

Fury moves extremely well for a giant, and if he fights with the same discipline that he displayed against Klitschko, and before that his second fight with Dereck Chisora, Fury has the style to snuff the American out.

The biggest weapon in Fury's belt is his jab. Wilder likes to fight from range, but if Fury's timing is good Wilder could be in for a very frustrating evening. And if he gets frustrated, Wilder will get wilder and gaps could open in his defence.

An early finish seems unlikely - six of Wilder's eight defences have gone at least eight rounds while Fury likes to take his time - but things could get frantic in the later rounds.

It's up to punters to decide whether they think the Gypsy King is mentally and physically ready, but if Fury is in good shape he has the skills to beat Wilder and the odds for him to do so look more than acceptable.