Gutsy Olesen can triumph in Sweden for a second time 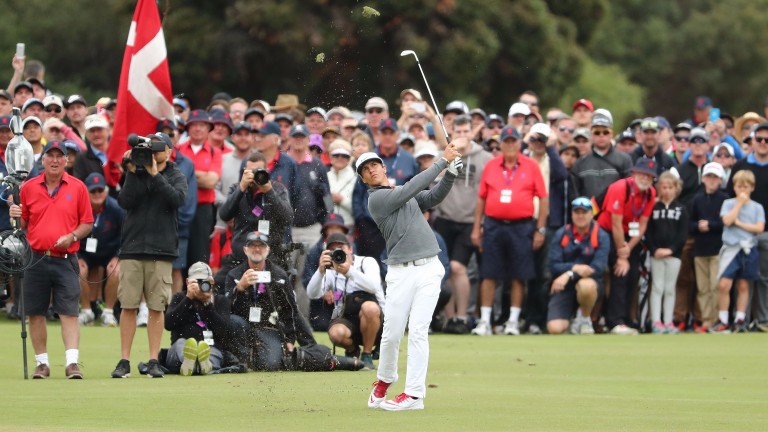 Chris Wood was a general 33-1 for the Nordea Masters ante-post, but the giant Bristolian is no bigger than 15-8 heading into the final round after hitting the top of the leaderboard.

Wood is one shot clear of Italian youngster Renato Paratore and French raider Benjamin Hebert at the Barseback Club, Malmo. Dangerous Dane Thorbjorn Olesen is alone in fourth place, but the big-name Swedes have flopped on home ground.

Alexander Noren and Henrik Stenson dominated the pre-tournament betting. Noren still has faint title hopes from a share of 16th place, six shots behind, but Stenson needs a miracle from ten shots adrift. Noren will be hoping to repeat the last-gasp heroics he produced to win at Wentworth last Sunday and the BMW PGA champion is 33-1 to triumph again.

Some showers and light breezes are forecast for the final round. The final pairing of Wood and Hebert is scheduled to tee off at 12.20pm UK and Ireland time.

Much of the early coverage of the Nordea Masters final round will centre around whether Alex Noren can produce another magical Sunday fightback.

Noren fired a sensational 62 to come charging through the BMW PGA Championship field and stun the leaders, and the in-form Swede is closer to the front for this mission. He was seven shots behind going into round four at Wentworth and won by two.

Expect Noren to go close – his all-Swedish 11am twoball with Kristoffer Broberg will be cheered to the rafters and they could be inspired to produce fireworks – but one of the proven European Tour champions teeing off behind them is more likely to triumph.

Chris Wood is a three-time Tour winner who should be comfortable with his position. He has won the BMW PGA Championship and performed well in Ryder Cup combat, so finishing off the Nordea Masters from the front should hold no fears for him.

Wood at 15-8 is no more than a fair price, though, given how difficult it is to rule out anyone in the chasing pack.

Benjamin Hebert has looked good enough to win in this grade for a long time, having been victorious six times on the Challenge Tour, including the 2014 Norwegian Challenge. Renato Paratore is a maturing youngster who is starting to become a regular on European Tour leaderboards.

Jamie Donaldson is a former Ryder Cup star getting game back after injury problems, while Jeunghun Wang won the Qatar Masters in January. Defending champion Matthew Fitzpatrick closed with a 66 at Wentworth last week and is close enough to catch Wood, while Alexander Levy is a four-time Tour champion on the same score.

Perhaps the best punting option on the leaderboard, though, is Thorbjorn Olesen. This cool customer is excellent in contention and can triumph just across the border from his homeland.
Olesen won the GolfSixes event alongside Lucas Bjerregaard last month and has four European Tour titles under his belt as an individual. His lone Challenge Tour victory – the 2010 Princess – came in Sweden.

Olesen can claim the trophy at 6-1, while final-round twoball punters should consider a double on Noren to beat Broberg (11am) and Fitzpatrick to beat Jose-Filipe Lima (11.40am).