Gunslingers should serve up a feast

Montgomery could have a big effect 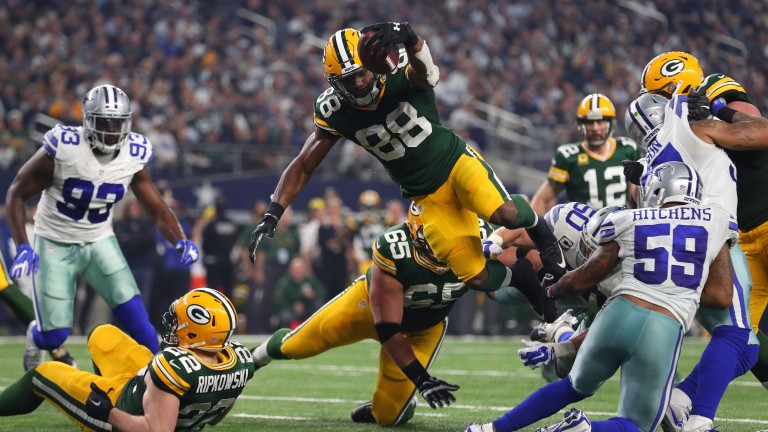 It is not difficult to see why a shootout is anticipated between the two NFC challengers who are left in the race for a place in the Super Bowl.

The league's top scorers Atlanta, who scored 71 more points than any other team during the regular season, and Green Bay, who fired an average of 27 in their 16 matches, are so good offensively that over-the-point backers will have to clear 60 in the clash at the Georgia Dome.

It is quite feasible that the total could surpass that line. Not only are the Falcons' Matt Ryan and the Packers' Aaron Rodgers the hottest quarterbacks in the game, but they will be facing two pass defences who have struggled all season.

Only New Orleans allowed more yards than Green Bay and Atlanta's tally was the 26th best in the league, so expect these two quarterbacks to have a field day.

The problem for Rodgers is that his receiving options could be limited as three of his key targets won't know if they are fit to take the pitch until gametime.

Rodgers was still able to orchestrate victories over the New York Giants and Dallas without his top receiver Jordy Nelson, who suffered a rib injury against the Giants, but he will be desperate for him and Davante Adams at least to be available.

That injury issue goes a long way towards explaining why the Packers are six-point underdogs, and points to running back Ty Montgomery having a significant influence.

Montgomery was an injured receiver when the Falcons beat Green Bay 33-32 in Week Eight, but he has filled in well at running back after the powerful Eddie Lacy picked up a season-ending injury.

He could see plenty of the ball and, having scored two touchdowns in last week's win over Dallas, he looks a decent shout to go over at 6-5.

On the other side, Julio Jones remains the Falcons' biggest aerial threat, but it would be unwise to rule out the influence former Bengals receiver Mohamed Sanu could have.

He has had a decent first season at Atlanta and, after grabbing a season-high 89 yards in the Falcons' win over the Packers from nine receptions, including a touchdown, his yards-line of 47.5 could prove modest.

Team News
Green Bay
The receiving trio of Davante Adams (ankle), Geronimo Allison (hamstring) and Jordy Nelson (ribs). There has also been a sickness bug in the camp this week, but it should not threaten the participation of any starters