Gunners may be out of Luk in hitting Premier League summit 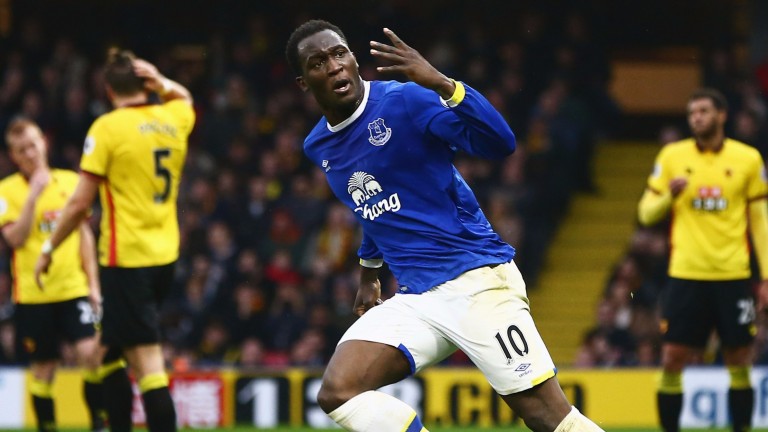 A win for Arsenal at Everton will see them hit the Premier League summit once again and bookmakers are taking few chances by rating the Gunners odds-on to become the first visiting top-flight team to win at Goodison Park this season.

It has been a miserable few months for Everton, who have slipped badly with one win in 11 in all competitions after a bright start, but Arsenal cannot be considered a bargain bet and it is worth looking to the home side for something tastier in the markets.

Backing Romelu Lukaku to score could be just the ticket. He notched both goals in Everton’s 3-2 defeat at Watford on Saturday. The game highlighted the clear defensive issues facing Toffees boss Ronald Koeman, but it took the Belgian’s Premier League goal tally to nine.

Only the big three of Alexis Sanchez, Diego Costa and Sergio Aguero are more prolific and his goals-per-minute ratio of one every 109 minutes compares favourably even to Sanchez's 114 minutes.

Lukaku has scored in six of his 14 Premier League appearances and will fancy his chances of at least unsettling an Arsenal defence missing centre-backs Per Mertesacker and Shkodran Mustafi.

It looks like Gabriel Paulista will partner the more reliable Laurent Koscielny at the heart of the visiting defence and together they could struggle to contain the Belgian beast.

Arsenal have gone ten games without keeping a clean sheet despite losing just twice in all competitions this season.

Their unbeaten Premier League run, which has stretched to 14, will warm the heart of Arsene Wenger and his side lie only three points behind leaders Chelsea.

And from an attacking point of view things are going almost perfectly for the Gunners.

Sanchez has scored 11 Premier League goals and his energy enables Arsenal to press from the front which cannot be done to the same extent when Olivier Giroud leads the line.

Eleven goals have been scored in the last three Premier League matches but backing Arsenal at odds-on away from home against a side expected to finish in the top half is asking for trouble.

Last season Arsenal won just once away to a top-half opponent, conceding 21 times in those nine road encounters and, despite their disappointing run, Everton are still comfortably eighth in Sporting Index's seasonal points market with a quote of 52.5-54.

Maybe that underestimates the task facing Koeman in sorting out the Merseyside mess, but Tottenham and Manchester United both had to settle for a point at Goodison this season.

Meanwhile, Arsenal's away wins have come at Watford, Burnley, West Ham, Hull and Sunderland which is not evidence enough that the Gunners have truly solved their issues in this type of fixture.

The Toffees are in a sticky situation but Lukaku at least gives them hope of denting Arsenal's title charge.

Arsenal
Shkodran Mustafi will be out for three weeks and joins Aaron Ramsey, Mathieu Debuchy, Santi Cazorla, Per Mertesacker and Danny Welbeck on the sidelines.