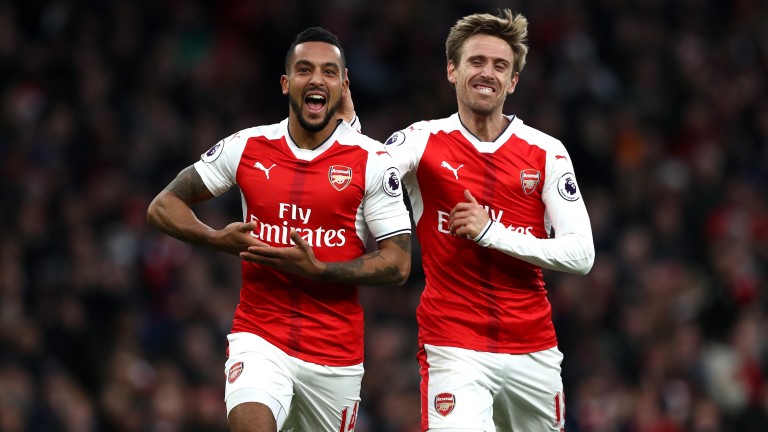 United, in no great form or shape, thrashed West Ham 4-1 and exposed Slaven Bilic’s back three repeatedly – and that poses a real headache for the Croat.

Whatever United can do going forward, Arsenal tend to do quicker and better, and being the away team in Stratford certainly won’t slow them down.

The Gunners, unbeaten in the Premier League since the opening weekend of the season, can win this capital clash as comfortably as the prices imply.

Indeed, their chances were given a further boost yesterday when Bilic revealed that Michail Antonio and Aaron Cresswell are crocked.

The wide men in Bilic’s midfield four are crucial. The pace and goalscoring instincts of Antonio have earned him six goals this season and an England summons. Cresswell was sorely missed at the start of the season through injury, because his link-up with Dimitri Payet had been so important in their success last term.

Those are two huge losses and the impending return of Andy Carroll – probably off the bench – pales next to that double whammy.

Arsenal were a best price 4-5 last night, odds that are hard to dispute. West Ham are without a win in five (though four of those were away) but it was the manner of the dismemberment at Old Trafford that will perturb Bilic.

The Gunners also have a good record at West Ham – unbeaten in eight league visits – though all of those were to Upton Park, of course, so it becomes a slightly less relevant statistic. What it does show, however, is that Arsenal continue to travel well under Arsene Wenger. They are unbeaten away in the league since February and have failed to score in only two of their last 14 road games.

Successes at Upton Park have been mirrored nationwide and there’s every reason to think they’ll relish a first trip to London Stadium, especially at a time where West Ham’s players and fans are far less cheery about the place.

One player who will surely enjoy a run at Winston Reid and his defensive pals is Theo Walcott, whose general form and goalscoring touch suggests he’s worth a punt at 6-1 to open the scoring.

The England flyer scored nine for Arsenal in all competitions last season and he’s already matched that total this term. He’s sure to get chances and he looks confident enough to convert them.

These teams played out a 3-3 draw at Upton Park in April and the look of the sides suggests goals. So no surprise that it’s 4-6 about both teams scoring.

West Ham
Diafra Sakho is out for six weeks, Michail Antonio and Aaron Cresswell for one week. Sam Byram, Reece Oxford and Gokhan Tore were already out. Andy Carroll is fit.
Arsenal
Right-backs Hector Bellerin and Mathieu Debuchy are out. Santi Cazorla and Danny Welbeck are still injured while Olivier Giroud is a doubt.