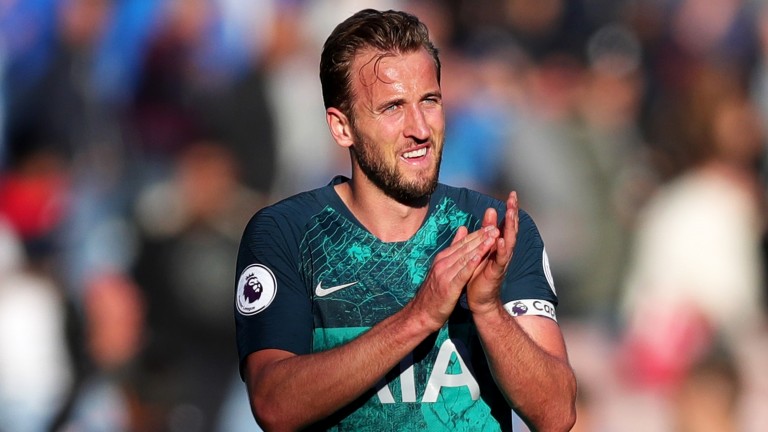 Harry Kane has scored goals for Tottenham against Wolves and PSV in the last week
Getty Images
1 of 1
By Dan Childs 8:00PM, NOV 5 2018

At the halfway point of the Champions League group phase it looks like win or bust for Tottenham but they can stay in the hunt by sweeping aside PSV Eindhoven at Wembley.

For Spurs to have a realistic chance of qualifying they must win their last three games, and that includes a daunting trip to Barcelona on matchday six.

But PSV at home is the easiest of the six-game schedule and Spurs deserve to be long odds-on favourites.

PSV have been dominant in the Dutch league, winning all of their 11 league games and opening up a five-point cushion over second-placed Ajax.

But Erevidisie teams are no longer feared in continental competitions. The Dutch league is ranked 11th on Uefa coefficients and PSV have struggled in Group B after losing 4-0 at Barcelona and 2-1 at home to Inter before scrambling a 2-2 draw at home to Spurs.

PSV's clash with Spurs on matchday three was billed as a must-win match for both sides but the Londoners were far more disappointed with the outcome after dominating for long periods and creating several clear chances.

Spurs won the shot count 24 to ten and carved out a 65 per cent share of possession and those statistics are even more impressive, given they played for 17 minutes (including six minutes of injury time) with ten men after the 79th-minute dismissal of Hugo Lloris.

There was huge criticism of Lloris for his ill-judged dash from goal, which was probably the defining point of the game.

However, another key factor was the waning influence of playmaker Christian Eriksen, so impressive on his return to the starting line-up but unable to keep it going in the final 25 minutes.

The 87th-minute equaliser from Luuk De Jong was a hammer blow to Spurs' hopes of qualifying and continued their trend of conceding late Champions League goals.

Four of the eight goals they have shipped have been in the 87th minute or later, costing Pochettino's men five precious points which would have had them sitting pretty.

All they can do is take it game by game and they look in reasonable shape. Eriksen is closer to full fitness and Dele Alli is available after being rested for Saturday's 3-2 victory at Wolves.

Offensively, Spurs should be close to their best but they are stretched in other areas with Lloris suspended and Jan Vertonghen, Danny Rose, Mousa Dembele, Eric Dier and Victor Wanyama injured.

Vertonghen, Spurs' most experienced and reliable defender, is the biggest loss and there may be a lack of protection for the back four because Dembele, Dier and Wanyama are all holding midfielders.

PSV should get opportunities to counter and will look to use the pace of Mexican livewire Hirving Lozano, who was the most effective attacker on show in the reverse fixture.

Mark van Bommel's side are likely to score for an 11th successive game but it may not be enough to deliver any points.

Their defence couldn't handle Spurs at the Phillips Stadion and only some wayward finishing and questionable officiating over Kane's disallowed first-half goal let them off the hook.

Spurs have shown they can find all sorts of ways to fall short on Champions League nights but the class gap to PSV looks wide and should be reflected by the result.

Team news
Tottenham
Hugo Lloris is suspended and Mousa Dembele (ankle) has joined Danny Rose, Eric Dier, Victor Wanyama, Jan Vertonghen and Vincent Janssen on the injury list. Dele Alli is back in contention after being rested at the weekend.

PSV Eindhoven
Ryan Thomas (knee) is out long-term and did not make PSV's Champions League squad.

Key stat
PSV have scored in their last ten matches.