Cologne can clinch title in style 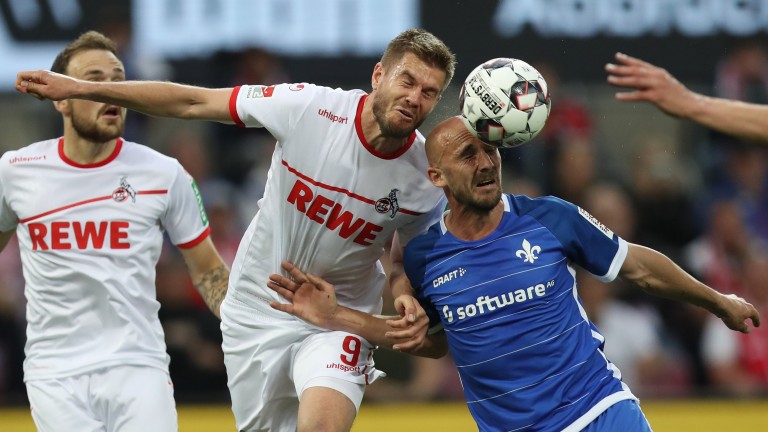 Cologne's Simon Terodde (centre) competes for the ball with Patrick Herrmann of Darmstadt
Maja Hitij
1 of 1
By Dan Childs 8:00PM, MAY 5 2019

Cologne have led the Bundesliga 2 for the last two months and can clinch the title by defeating lowly Greuther Furth at Sportpark Ronhof.

There is a mathematical risk of Cologne missing out on automatic promotion although they look very secure after third-placed Union Berlin lost 2-1 at Darmstadt.

Union Berlin have just two games remaining and are six points adrift of the leaders, who have a far superior goal difference.

Second-placed Paderborn are five points off the pace but Cologne have a game in hand on both teams and it looks a matter of time before they seal first place.

Their first of three opportunities comes at Greuther Furth – a side still needing one more point to stave off the threat of relegation.

Greuther Furth have been strong at home – losing just two of 15 games – but have found victories hard to come by in recent months.

They were sixth at the start of December but have slipped down the table after winning just three of their last 17 games.

A lack of firepower has been a major problem for Stefan Leitl's side and their chances of unsettling Cologne are reduced by the absence of ten-goal top scorer Daniel Keita Ruel, who continues a three-game suspension.

Fellow forward Daniel Reese is also banned so the chief goalscoring responsibilities fall on the shoulders of Daniel Steininger, who has netted just twice in 14 league appearances this season.

The Billy Goats have been stunned by successive defeats away to Dynamo Dresden (0-3) and at home to Darmstadt (1-2) but the massive incentive of clinching promotion should be enough for them to get back to winning ways.