Reds youngsters have fourth round in their sights 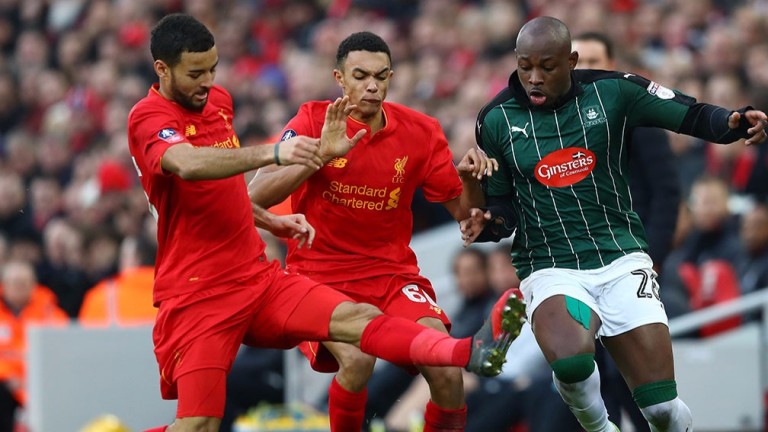 They huffed and they puffed but Liverpool’s kids failed to blow away Plymouth Argyle’s parked bus at Anfield last week, and the task of shifting the Green Army doesn’t look a great deal easier tonight.

The same Reds’ youngsters will be given a second chance to get it right when the teams meet in the FA Cup third-round replay at Home Park, but don’t expect a great deal of tactical changes from their Sky Bet League Two hosts.

Derek Adams’ men got it pretty much perfect on Merseyside, where they enjoyed a meagre 23 percent possession, so he’d be mad to suddenly go all gung-ho when the teams go again.

The Scot doubtless had penalties in mind when the draw was made in December and that has still got to be his ambition. Paddy Power go 20-1 that either side goes through courtesy of a shootout.

With lessons learned from the first match, however, you’d expect Liverpool to get it right although it might not be straightforward.

Plymouth, albeit for their level, are a decent enough side so long odds-on quotes about the visitors are easily swerved and maybe the draw-Liverpool double result is a better alternative. Plymouth won’t wilt but an hour or more of defending against the rapid Reds will have to take its toll eventually while Jurgen Klopp can also introduce world-class attacking options off the bench if the scores are still level.

Klopp took a fair amount of flak for sending out a side with an average age of 22 in the first leg but the German won’t alter his approach, especially with a Saturday lunchtime kick-off against Swansea in the Premier League to plan for.

He also has one or two players with knocks and Sadio Mane out in Africa, so he’s bound to make copious changes to the team who drew with Manchester United on Sunday.

They should, however, enjoy playing at Home Park, one of League Two’s better arenas and nicer playing surfaces and at least they’ll know what to expect from Argyle with their 4-5-1 set-up.

Plymouth have lost a couple of key operators since the first tie – right-back Gary Miller and midfielder Connor Smith are out, the latter’s absence likely to be felt more because there is no obvious replacement in his role.

The home team, 10-1 shots, will be buoyed by the fact that Liverpool are without a win in four, haven’t scored from open play in their last three and they’ll be encouraged by the manner of their effort at Anfield. If you think lightning can strike twice, the bookies will lay you 16-1 no goalscorer after 90 minutes.

What is sure is that Luke McCormick is going to be the busier of the two keepers. He had 52 touches in the first game, more than any other Argyle player, and he was busy again at the weekend in a 4-2 win against Stevenage, an open encounter which Adams will be wary of replicating against Liverpool.

Team news
Plymouth
Right-back Gary Miller and midfielder Connor Smith (both ankle) are out. Ryan Donaldson and David Ijaha were already absent. Jakub Sokolik and Nathan Blissett are cup-tied and David Goodwillie has been suspended by the club until further notice.

Liverpool
Lucas Leiva is a doubt with a knee injury but Nathaniel Clyne (also knee) is out. Joel Matip is fit but may be unavailable. Jurgen Klopp is expected to field another young side.