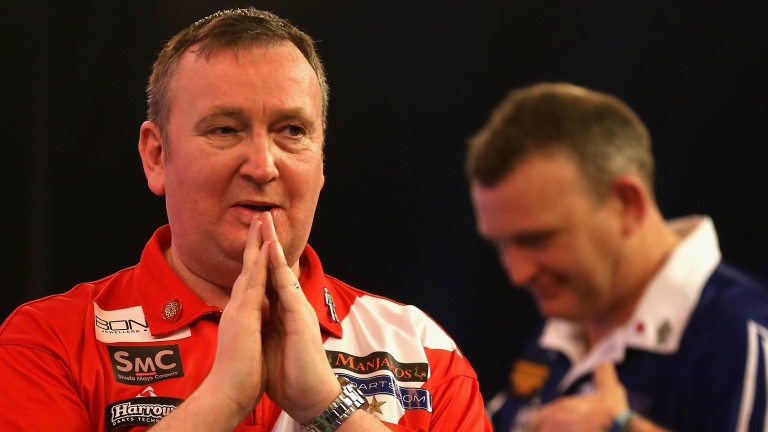 Glen Durrant may not need to pray much to go all the way in Wolverhampton
Alex Pantling
1 of 1
By Steve Davies 8:00PM, NOV 9 2018

Only one arrowsmith from the British Darts Organisation has ever won the Grand Slam of Darts but Glen Durrant has a great shot at making that two come next weekend.

Duzza, the reigning and two-time Lakeside world champion, is ready to follow in the footsteps of previous BDO winner Scott Waites in this cross-code tungsten tear-up from Wolverhampton.

Durrant is one of eight men flying the BDO flag in the 32-man field – and it's as strong as that body’s contingent has ever been.

He's in a tough group alongside Simon Whitlock, Gerwyn Price and Andrew Gilding but then he was in every bit as strong a section 12 months ago – he had Peter Wright, Corey Cadby and Alan Norris for company – and he finished top of that one. He then beat Dave Chisnall before losing to Wright in the quarters.

Durrant is in the opposite half of the draw to 11-10 favourite Michael van Gerwen, next-best Gary Anderson and red-hot James Wade, and the Teessider knows he's got the game to compete with the very best.

A five-time winner this year, Durrant was purring at the recent World Masters – the BDO's second biggest event – where his averages didn't drop under 97 on the way to reaching the final. The surprise was that he lost that match to Adam Smith-Neale.

Van Gerwen will have his fans at odds-against despite back-to-back flops at the European Championship and World Series while Anderson has had a quiet but unimpressive autumn though much depends on his mindset.

Those of us who questioned whether Wade could go well in Vienna last week having won the week before, are asking themselves two questions.

Ryan Searle looks a massive price to qualify from Group H. Searle is moving up the rankings courtesy of a year in which he has reached a floor final and the International Open quarter-finals. He took out Gary Anderson in the former and Peter Wright in Germany in September.

The Somerset slinger with the effortless throw then saw off both Darren Webster and Kyle Ander­son in a red-hot qualifying heat for this event.

He is in a tough section with Rob Cross, Dimitri van den Bergh and Lakeside runner-up Mark McGeeney but with Cross in particular looking off-colour, Searle looks to have an outstanding chance.